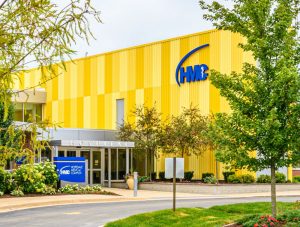 SPRINGFIELD – One year into the COVID-19 pandemic, Gov. J.B. Pritzker on Thursday, March 11 announced a new initiative focusing on vaccine access for rural parts of the state and said he is “cautiously optimistic” about future reopenings and public gatherings.

Speaking in a news conference at a mass vaccination site at Shabbona Middle School in Morris, Pritzker said he is encouraged that the state is “getting to the end” of the COVID-19 pandemic, but he continued to stress patience as the state works to vaccinate residents.

One week after announcing a vaccine equity initiative for urban areas and communities of color, the state on March 11 announced that it would also begin to direct federal deliveries of doses to nine downstate critical access hospitals. The nine locations include hospitals in downstate Christian, Ford, Hamilton, Logan, Mercer, Montgomery, Tazewell, Vermillion and Wayne counties.

“Rural communities deserve the same protections from the virus that suburban and urban communities get,” Pritzker said. “While national demand is still higher than national supply, my team is allocating what we receive from the federal government across the state as soon as we get it.”

The Illinois Department of Public Health announced an additional 1,700 new confirmed and probable cases of COVID-19 on March 11 out of 89,893 total test results. IDPH announced 55 additional deaths due to COVID-19 Thursday, bringing the state’s death toll to 20,863.

A total of 1,118 individuals were reported to be hospitalized with COVID-19 and of those, 231 were in intensive care units and 102 were on ventilators — all were at their lowest point of the entire pandemic.

Earlier this week, the city of Chicago announced both Chicago professional baseball teams will allow spectators at games with up to 20 percent capacity, and there is optimism for the return of summer events such as the Taste of Chicago and the Chicago Air and Water Show.

The state currently remains in Phase 4 of the Restore Illinois reopening plan, which prevents gatherings of more than 50 people. Phase 5 is triggered when “either a vaccine is developed to prevent additional spread of COVID-19, a treatment option is readily available that ensures health care capacity is no longer a concern, or there are no new cases over a sustained period.”

When asked about the possibility of loosening restrictions on gatherings and potentially moving forward to the next phase of reopening on March 11, Pritzker said that he remains “cautiously optimistic” that larger-scale events could begin to take place later this year.

However, Pritzker noted that new variants of the virus that could be transmitted more easily were of concern and could prevent a widespread immediate reopening.

“I want to get to Phase 5 as fast as humanly possible,” Pritzker said Thursday. “We’re being cautious, but I’m also cautiously optimistic. It’s one of the reasons why we’ve begun to open up even more.”

Pritzker expressed optimism that “medium-sized” gatherings could take place late this summer, including conventions and outdoor events, with safety precautions in place.

“We’re going to keep moving as we can, based upon the guidance of the scientists,” Pritzker added.