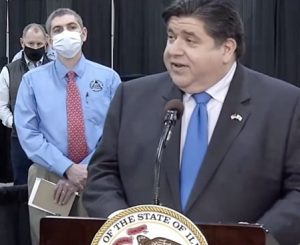 SPRINGFIELD – Gov. J.B. Pritzker announced Wednesday, Feb. 10 that the state plans to expand COVID-19 vaccine eligibility to individuals of all ages who have comorbidities and underlying conditions by Feb. 25.

Speaking at a news conference in Quincy Wednesday, Pritzker said the expansion of eligibility under Phase 1B of the state’s vaccine distribution plan comes as a result of increased availability of doses at the federal level.

Pritzker said the expansion of eligibility would include individuals with comorbidities as defined by the U.S. Centers for Disease Control and Prevention, such as diabetes, cancer, lung disease or heart disease.

“My administration will be working with all local public health departments to fit these higher risk individuals into their community vaccination plans,” Pritzker said Wednesday. “As quickly as we receive enough vaccine supply, we need to waste no time protecting them.”

According to a Wednesday news release from the governor’s office, areas that have “substantially completed” their existing Phase 1B population can move ahead with the vaccine expansion earlier than Feb. 25 at the determination of local public health officials and the Illinois Department of Public Health.

Pritzker said the state has secured a 5 percent increase in vaccines received per week from the federal government, and he expressed optimism that the state would continue to receive more vaccine doses as a result of increased production.

“I have implored the president and his administration to get vaccines flowing at a higher rate, and they’ve been responsive,” Pritzker said.

A new single-dose vaccine by Johnson and Johnson could also be approved by the U.S. Food and Drug Administration in a hearing scheduled for Feb. 26. If approved, the company projects that 100 million additional doses could be made available to states by the end of June.

While production of existing vaccines continues to expand at the federal level, Pritzker urged “enormous patience” as the state works to build vaccination sites and expand its administration efforts.

“I wish I could make enough vaccine magically appear so that we could get all of our Illinoisans vaccinated right now,” Pritzker said. “That will happen over the next coming months, but today we all have to exercise patience as more vaccine is being produced.”

The Senate Health Committee will meet virtually at noon Thursday regarding the state’s vaccination efforts. IDPH Director Dr. Ngozi Ezike and other public health officials have been called to testify.

The state’s seven-day rolling positivity rate continued to hold steady at 3.3 percent Wednesday as IDPH announced 2,825 new cases out of 82,885 test results. The positivity rate has not moved more than a tenth of a percentage point for the past week.

Public health officials announced 53 additional deaths due to COVID-19 Wednesday, bringing the statewide death toll to 19,739 since the pandemic began. Illinois has recorded over 1.1 million cases of COVID-19 to date.