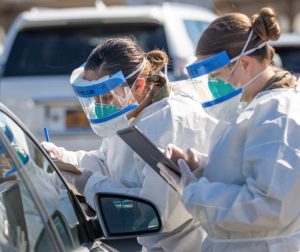 The free COVID-19 testing sites are set up at various Illinois counties and available to everyone ages 6 and older. (Photo courtesy of St. Clair Health Dept.)

SPRINGFIELD – As COVID-19 case counts and positivity rates continue to rise in Illinois, so do new unemployment claims.

The seven-day rolling average test positivity rate increased to 4.9 percent Thursday, Oct. 15 as the state reported another 4,015 confirmed cases of the virus, the largest one-day total aside from Sept. 4, when multiple days of test results were reported due to a data backlog being cleared.

While the high case count was in part due to increased testing output with 67,016 results reported over the previous 24 hours, the one-day positivity rate of 6 percent was the highest it’s been since early September. The rolling average positivity rate has increased for 11 straight days and hit its highest point since June 7.

There were 1,932 patients hospitalized for COVID-19 at the end of Wednesday, the second straight day above 1,900, a number not seen since mid-June. That included 388 COVID-19 patients in intensive care units and 143 on ventilators.

The virus also claimed another 53 lives in the past 24 hours, according to the Illinois Department of Public Health, the highest daily total since 63 casualties were reported on June 24.

That brought the total COVID-19 casualty count to 9,127 among 331,620 confirmed cases, while testing has surpassed 6.5 million since the pandemic began.

The pandemic and associated restrictions continue to wreak havoc on the state and national economy, as the Illinois Department of Employment Security reported that 47,528 Illinoisans filed first-time unemployment claims for the week ending Oct. 10, an increase of 31 percent from the previous week. That was accompanied by an 8 percent decrease in continued unemployment claims, which hit 447,060 for the week.

Nationally, there were 898,000 new unemployment claims for the week, an increase of 53,000 or 6 percent from the previous week.

Meanwhile, Region 1 of the state’s COVID-19 mitigation plan, which includes the northwest part of the state, saw its positivity rate increase to 10.3 percent, according to the most recent data. It has been under increased mitigations such as the closure of restaurants and bars to indoor service since Oct. 3.

Thus far, the positivity rate has only increased recently, and it must fall below 6.5 percent for three straight days for those mitigations to be lifted.

Region 5, which includes several counties in southern Illinois, saw its positivity rate decrease for a second straight day after flashing above the 8 percent threshold that could lead to greater state mitigations for one day. It was at 7.5 percent as of Monday, Oct. 12 the latest day numbers were available.

Excluding saliva tests conducted at the University of Illinois, east-central Illinois’ Region 6 had a 6.6 percent positivity rate as of Monday. All other regions ranged from 5.2 percent to 7 percent.