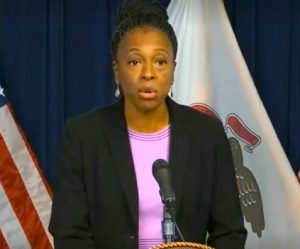 SPRINGFIELD – The state has been advised it will receive roughly half of the shipment of COVID-19 vaccinations that it originally expected from the federal government for the next two weeks, Gov. J.B. Pritzker announced Wednesday, Dec. 14.

Next week’s national shipment was originally slated to include approximately 8 million vaccine doses but is now expected to include only 4.3 million. The following week’s shipment was to include 8.8 million doses but was reduced to 4.3 million as well. Because the vaccine is being distributed on a population basis, each state will have their doses cut proportionally, Pritzker said.

Pritzker said the news was dictated by Gen. Gustave Perna, who is chief operating officer of Operation Warp Speed, the federal government’s vaccination effort. The vaccine is manufactured by the drug companies Pfizer and BioNtech.

“This development will likely cut our state’s projected Pfizer shipments this month by roughly half,” Pritzker said. “The same is true across the rest of the nation. This does not affect vaccine shipments that already arrived at our Strategic National Stockpile on Monday as part of our initial 109,000 doses for this week. Shipments to regional destinations across the state remain on schedule.”

Illinois Department of Public Health Director Dr. Ngozi Ezike said final expected numbers have not been decided for future shipments as estimates are changing on “literally an hourly basis.” She said the state did not have information as to why the anticipated shipment was cut in half.

Ezike also said while the vaccine is promising and the “beginning of the end” of the pandemic, continued social distancing, masking and avoiding large gatherings are needed until the vaccine is widely administered. It’s also important for a majority of Illinoisans to take the vaccine in order for it to be effective on a broad scale, she said.

“If they don’t come out of the ultra-cold freezers and get into the arms of individuals, we make no progress on this pandemic,” she said.

The announcement came as the state reported another 7,123 confirmed or probable cases of the virus, driving the seven-day average case positivity rate downward one-tenth of a percentage point to 8.5 percent.

Hospitalizations for COVID-19 continued to show a marked decrease as well, hitting their lowest point in 37 days with 4,793 beds in use by those with the disease. That included 1,045 in intensive care unit beds and 590 on ventilators, both numbers falling from the day prior.

IDPH also reported another 146 deaths over the previous 24 hours, bringing the death toll to 14,655 among 870,600 confirmed or probable cases and more than 12 million tested since the pandemic began.

Pritzker said the news of decreasing numbers was positive and he said it was proof that mitigation efforts that included closing bars and restaurants are working. He noted that hospitalizations for the virus exceeded 6,000 for several days at their second-wave peak compared to roughly 5,000 in the spring.

“Now we got to 6,175 people in our hospitals across the state of Illinois (with COVID-19),” he said. “And when we imposed a closure of indoor bars and restaurant service — you know, you saw it takes several weeks, in fact, one to two incubation periods for it to take effect — and then guess what’s happened, we’re now below 5,000 hospitalizations across the state. I mean, there is cause and effect to the mitigations that we’ve put in place, and they’ve been proven time and time again, the scientists have been right, and we’ve been following their advice.”

Tier 3 mitigations took effect statewide Nov. 20. One incubation period is thought to be 14 days maximum, according to the U.S. Centers for Disease Control and Prevention.

For the vaccination effort, Pritzker said the state has been working with local public health departments to practice its administration for weeks, as the Pfizer vaccine must be kept at 70 degrees below zero Celsius and can spoil if not administered within five days of being removed from ultra-cold storage.

Pritzker said a vaccine manufactured by the drug company Moderna could also be approved this week, and it can last 30 days after being removed from the regular freezer storage that it requires.

That could make the logistics of distribution easier, he said after taking questions about timelines for distribution to certain counties and health departments. But Pritzker said it is unclear how many doses of that vaccine will arrive and when.

Ezike advised that distribution of the existing Pfizer vaccines must be done deliberately to minimize spoilage due to the requirement of ultra-cold storage.

“What we’re calling bureaucracy, a lot of it is logistics for a very difficult product that no one has ever dealt with in the vaccine world,” she said. “So we want to get it right, not just fast.”

Thus far, the vaccine has been administered to health care workers in Illinois, although long-term care residents are also in the first tier to receive it. The federal government has a contract with CVS and Walgreen’s pharmacies to administer those shots.

“And the first vaccinations by the pharmacy teams into long-term care starting with the skilled nursing facilities will begin the week of Dec. 28,” Ezike said, noting the state plans to ship them next week.

She said the decreased shipment numbers might slow that timeline, but the state is awaiting more information before it can know for sure.