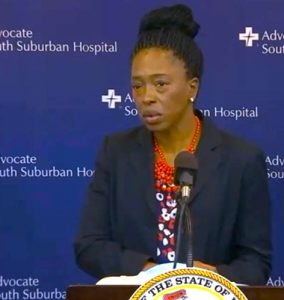 SPRINGFIELD — Gov. J.B. Pritzker urged residents on Wednesday, Nov. 4 to stay focused on slowing the spread of COVID-19 as the state’s one-day COVID-19 case positivity rate hit 10.5 percent– its highest rate since May 22 —and the Illinois Department of Public Health reported its second highest one-day total of new confirmed cases with 7,538.

“I know there’s a lot of focus on other current events right now, but I do want to remind everyone that Illinois, and the nation, especially the states making news right now for their role in the presidential election, are in the middle of a public health crisis. And we cannot forget to take the necessary precautions to beat this pandemic down,” Pritzker said during his daily press briefing on Wednesday.

Hospitalizations for COVID-19 once again pushed past second-wave highs as the rolling seven-day average test positivity rate in all 11 of the state’s mitigation regions exceeded 10 percent.

The state also reported another 55 COVID-19-related deaths, bringing the state’s death toll since the pandemic began to 9,933 among 437,556 confirmed cases out of 8 million test results reported.

At the beginning of last month, the state saw an average of about 23 deaths to COVID-19 each day, and that average is now up to 45 deaths per day, Pritzker said.

As of Tuesday evening, hospitals reported 3,761 beds in use by COVID-19 patients, the most since May 26. Of those hospitalized, 776 were in intensive care unit beds and 327 were on ventilators.

“We are fully into the second wave or second surge, and the cases are increasing exponentially,” Ezike said.

According to Ezike, the IDPH is monitoring bed capacity across the state — especially in regions 1 through 6, which constitutes most of the state excluding Cook County and its surrounding suburbs. Those areas are in less close proximity to each other than regions 7 through 11, which includes Chicago, Cook County and the adjacent suburban counties, meaning it is more difficult to transfer people from one hospital to another.

“There is a bed issue that’s brewing now, that’s only going to grow. We had 7,500 new cases. That means that we have future hospitalizations, future needs for ICU beds, in a situation where some hospitals are already cramped. So yes, we have a significant problem,” Ezike said.

The state is in contact with local regions, she said.

Jerry Nowicki contributed to this report.