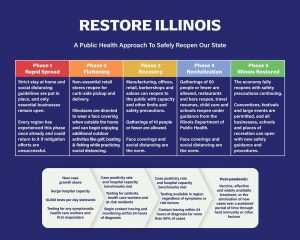 SPRINGFIELD — Cases of COVID-19 disease continue to climb in Illinois along with the positivity rate among tests conducted.

The rolling seven-day average positivity rate has climbed by one-tenth of a percentage point per day over the past three days, sitting at 4.3 percent as of Tuesday, Aug. 18.

That number was driven upward by a one-day positivity rate of 5.1 percent Tuesday, the highest one-day statistic since June 5. There were 1,740 new confirmed cases of the virus reported Tuesday among 34,175 tests completed over the previous 24 hours.

The Illinois Department of Public Health also announced an additional 26 virus-related deaths over the previous 24 hours, bringing the total number of fatalities since the pandemic began to 7,782.

There have been 209,594 confirmed cases of the virus thus far among more than 3.4 million tests completed.

Two days after Gov. J.B. Pritzker announced increased restrictions in Region 4 of the state’s mitigation plan, the Metro East area remains the only region of 11 that has warranted such a state action. As of Saturday, Aug. 15, Region 4’s rolling positivity rate was 9.5 percent and had increased for nine of the past 10 days.

Southern Illinois’ Region 5 had a positivity rate of 7.2 percent which was the next highest, followed by Region 7 in Kankakee and Will Counties at 6.7 percent, west-central Illinois’ Region 3 at 6.2 percent and suburban Cook County at 6.1 percent.

Hospitalization numbers continued to show a sustained increase from their pandemic lows, remaining at more than 1,500 COVID-19 patients hospitalized for the seventh straight day after dipping below 1,400 in mid-July.

At the end of Monday, Aug. 17 there were 1,510 COVID-positive individuals hospitalized, including 335 in intensive care unit beds and 128 on ventilators.