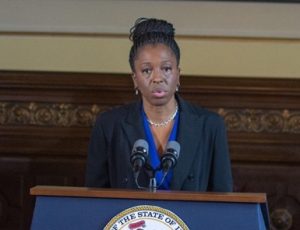 Compared to the 32,559 does administered Feb. 1, the one-day total reflects a steadily improving vaccination picture statewide as Gov. J.B. Pritzker’s administration faces continued criticisms for the state’s rollout of the vaccine.

The state reported a single-day record of 74,965 vaccinations on Friday, Feb. 5 while nearly 65,000 doses were administered over the weekend. Over 2.1 million doses have been distributed to Illinois with more than 1.4 million administered thus far. That means the state has administered about 66 percent of the vaccine doses it has received, with 2.4 percent of the state’s population having received both required doses.

The state’s seven-day rolling average for daily vaccinations stands at 55,455 per day, up nearly 10,000 additional daily doses when compared to one week ago.

As of Tuesday, Feb. 9, Illinois ranked 34th out of all 50 states in percentage of the population to receive at least one dose of the COVID-19 vaccine, according to data from the New York Times. The state had previously ranked as low as 47th, but has moved up in recent days as 9.1 percent of the state has received at least one dose.

While the state’s vaccination numbers have improved, some state lawmakers are calling for added transparency in the vaccination effort. Critics have attributed lagging numbers to a “confusing” process for making vaccination appointments statewide.

As a result, the chair of the Senate Health Committee, Sen. Julie Morrison, D-Lake Forest, announced she would hold a hearing regarding the state’s vaccination efforts at noon Thursday, citing a need for “greater efficiency” in the rollout of the vaccine.

According to a news release, Illinois Department of Public Health Director Dr. Ngozi Ezike is expected to testify at the hearing, along with officials from the Chicago and Sangamon County health departments.

Representatives of Walgreens and CVS pharmacies are also expected to participate in the hearing. The companies are responsible for administering vaccines at long-term care facilities through the federal government’s Pharmacy Partnership program.

Illinois remains in Phase 1B of its vaccination plan, making the vaccine available to residents age 65 and older, frontline non-health care essential workers and prison inmates. Approximately 3.2 million people are currently eligible to receive the vaccine across the state.

The state’s seven-day rolling COVID-19 positivity rate has continued to hold steady over the past several days.

The statewide positivity rate stood at 3.3 percent Tuesday, the sixth consecutive day it has been within a tenth of a percentage point of that number. IDPH announced 2,082 new and probable cases of COVID-19 around the state Tuesday out of 55,705 tests.

As of Monday night, 2,117 individuals were reported to be in the hospital with COVID-19, with 497 of those in intensive care units and 240 on ventilators.

An additional 20 deaths from COVID-19 were announced Tuesday, bringing the state’s death toll to 19,686.