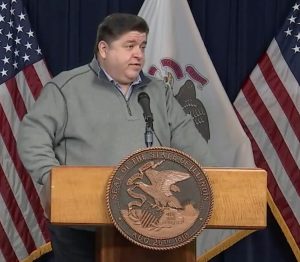 Gov. J.B. Pritzker speaks at his daily COVID-19 briefing in Chicago Thursday, Dec. 17 giving an update on the distribution of vaccines throughout the state. (illinois.gov)

SPRINGFIELD — Coronavirus vaccinations from the state’s National Strategic Stockpile were delivered Thursday, Dec. 17 to 77 hospitals in 45 counties throughout the state, Gov. J.B. Pritzker announced at his daily briefing.

The state received the first 43,000 doses on Monday, Dec. 14, which is separate from the federal shipment to Chicago, he said.

“From there, distribution was made from our Illinois Strategic National Stockpile to hospitals across the state. Doses were delivered first to our Regional Hospital Coordinating Centers, and also direct to DuPage County, then on to 45 counties and local health departments, finally arriving at 77 hospitals, all across the state,” Pritzker said.

Of that first shipment, about 3,500 doses were administered to health care workers as of Dec. 17, he said.

An additional 43,000 vaccine doses were sent directly from the federal government to health departments in Cook, Lake, Madison and St. Clair counties, he said.

“I’m pleased to say that all shipments arrived safely and securely at their destinations over the course of the last two days,” he said. “With these latest shipments, Illinois will have received the entirety of this week’s vaccine allotment. It is truly exciting to see health care workers, our heroes on the frontlines of the pandemic who have put themselves at risk every day to save lives, begin to receive their vaccines.”

The vaccine, developed by the drug companies Pfizer and BioNTech, was granted Emergency Use Authorization by the U.S. Food and Drug Administration last week. The first vaccines were administered to frontline health care workers in Illinois on Monday.

Illinois Department of Public Health Director Dr. Ngozi Ezike also provided an update from the Centers for Disease Control and Prevention and the FDA regarding the number of doses that are available in the multidose Pfizer vials.

She said states were initially given guidance that each vaccine vial contained five doses that could be administered to five individuals.

“At this time, given the public health emergency, the FDA is advising that it’s acceptable to use every full dose that can be obtained from this vial and from what people have seen here in Illinois, and across other states, a sixth dose can be extracted from that vial, and in some cases even a seventh dose,” she said.

However, she said, any remaining vaccine that is in the vial that does not equal a full dose cannot be combined with remnants from other vials.

“We don’t want to waste any vaccine, but it’s also critical that we make sure that every individual receives a full, safe and effective dose of vaccine,” she said.

The updates came as the state reported another 8,828 confirmed or probable cases of the virus, and a seven-day average case positivity rate of 8.4 percent, which decreased one-tenth of a percentage point from the day prior.

Hospitalizations for COVID-19 remained roughly level, with 4,804 beds in use by those with the disease, including 1,063 in intensive care unit beds and 575 on ventilators, according to the IDPH website.

IDPH also reported another 181 deaths over the previous 24 hours, bringing the death toll to 14,835 among 879,428 confirmed or probable cases of COVID-19 and more than 12 million tests since the pandemic began.

Ezike said the slight downward trend in hospitalizations and positivity rates is a sign the state is moving in the right direction, “but that’s not an indication that we should throw caution to the wind and make large holiday and New Year’s Eve plans and gatherings.”

She warned residents to hold small holiday gatherings or virtual meetings with friends and family this year.

“I especially want to encourage the young adults who sometimes feel invincible that you, too, need to take precautions,” she said. “For nearly two months we have seen that the highest number of cases have been in the age of 20 to 29. And while these younger people are much less likely to suffer severe illness, we still see that those younger individuals can expose our older family, our older friends who could suffer much more severe illness if they were to gather for the holidays. I strongly urge people to stay home and celebrate safely, so that we can have our giant post pandemic celebration.”