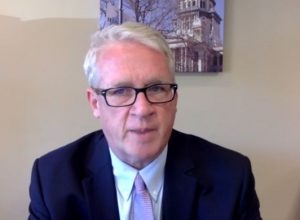 SPRINGFIELD – The top Republican in the Illinois House on Thursday, Oct. 6 called for Democrats, including Gov. J.B. Pritzker, to either demand that Democratic House Speaker Michael Madigan answer questions before a Special Investigating Committee or resign immediately.

During a virtual news conference, Minority Leader Jim Durkin, of Western Springs, openly accused the investigating committee’s chairman, Hillside Democrat Emanuel “Chris” Welch, of deliberately stalling the investigation until after the Nov. 3 election, a move that Republicans warn could thwart the entire investigation.

“There is one person who is in charge, and that is Gov. Pritzker, and he is the leader of the state Democratic Party,” Durkin said. “Today, I call on him to immediately demand those answers he has been requesting from Speaker Madigan or demand that he resign immediately.”

Durkin is one of three House Republicans who filed a petition calling for the investigation after Madigan was implicated in a bribery scheme involving utility giant Commonwealth Edison. In a deferred prosecution agreement filed in federal court in July, ComEd officials admitted that, over a nine-year period, they awarded no-work jobs and lobbying contracts to Madigan’s close associates in order to curry his favor for legislation that benefitted the company.

Republicans argue that Welch, by postponing any further hearings until after the election, has put the investigating committee under a severe time constraint. That’s because under House rules, all committees are automatically dissolved when the General Assembly adjourns its biennial session, which is currently scheduled to happen on Thursday, Dec. 3, the last scheduled day of the fall veto session.

That means Republicans would have to petition again for a new committee after lawmakers convene in January for the start of the 102nd General Assembly if they want the investigation to continue.

Welch has said he postponed further hearings because he did not want the investigation to be used as “political theater” leading up to the election. As evidence of that, he pointed to the fact that two Republican committee members – Reps. Deanne Mazzochi of Elmhurst and Grant Wehrli of Naperville – called out their Democratic challengers in a news conference this week, demanding they state publicly whether or not they would vote for Madigan for another term as speaker if they are elected.

But Durkin responded Thursday by insisting the investigation is not political.

“This isn’t politics. This is one of the most serious scandals that we’ve ever experienced in Illinois, and it’s just going to get larger,” he said. “It has nothing to do with politics. And it’s unfortunate that the Democrats look at this as politics.”

Madigan himself has not been charged in the bribery scheme and he has denied any wrongdoing. On Friday, Sept. 25, he issued a letter saying he would not testify before the investigating committee, again asserting that all he did was recommend some people for jobs at the company.

Days later, on Sept. 30, Pritzker said during a virtual news conference that he thought Madigan should testify.

“I strongly believe that the speaker should take any opportunity, and this is one, to present answers to the questions that I think all of us have,” Pritzker said.

The governor’s spokesperson later issued a statement saying, “As the Governor has said, he strongly believes the Speaker should answer questions and that any opportunity to answer questions is one the Speaker should take. That being said, there is a legislative process underway and as a co-equal branch of government, members of the General Assembly have used this process before and they are capable of managing it on their own.”

In addition to delaying any further hearings until after the election, Republicans have also complained that Welch is stalling the process by requesting what they call a “data dump” from ComEd, including records of all communications between the company and state officials – including former governors – over the past 10 years.

Republicans say the request could take months to fulfill, and Durkin called it “a fishing expedition” that was irrelevant to the work of the special committee.

“The committee’s charge is to investigate Speaker Madigan in his role with the deferred prosecution agreement,” Durkin said. “Going back decades to look into communications between a utility and legislative leaders and governors serves no purpose when the purpose of the committee is to determine whether or not Speaker Madigan has maligned the integrity of the chamber and if he’s committed conduct that’s unbecoming of a member of the House of Representatives.”

Welch issued a statement late Thursday saying Durkin’s “only goal is political theater” and urging the leader to “put the political performances aside and let our investigation take its course.”

“While Leader Durkin grandstands to prop up his politically vulnerable members, the committee is taking productive steps in the process he initiated,” he said in the statement. “Democratic and Republican counsel for the committee is working with ComEd to secure the documents both sides have requested.”