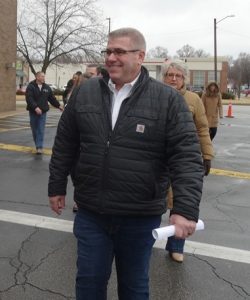 State Sen. Darren Bailey, Republican candidate for governor, is pictured while filing his nominating petitions in Springfield in March. A new poll showed him in the lead in the GOP primary race on Friday, June 10. (Capitol News Illinois file photo)

A new poll from the Chicago Sun-Times and Chicago radio station WBEZ shows downstate state Sen. Darren Bailey with a 15-point lead on Aurora Mayor Richard Irvin in the GOP governor race, a major reversal with 18 days to go before polls close on Tuesday, June 28.

Irvin’s campaign had earlier in the week pulled its downstate advertising and noted it was “reassessing” its strategy in the final stretch. His campaign is still advertising in the Chicago area as well as maintaining a statewide spot on Fox News Channel, according to a spokesperson.

At a news conference in Bloomington that he called to discuss public safety, Irvin downplayed the poll as a “snapshot in time.”

“We got two and a half weeks left,” he said. “You know, polls will change daily, but as I as I said, we’re going to continue to send out our message.”

The latest Irvin message, repeated seven times at the news conference between he and running mate Avery Bourne: “A vote for Darren Bailey is a vote to re-elect JB Pritzker.”

The Sun-Times-WBEZ poll showed Bailey with 32 percent support compared to 15 percent for Irvin among 677 likely GOP voters who were polled Monday and Tuesday by Public Policy Polling. Petersburg venture capitalist Jesse Sullivan was the only other candidate to crack double digits at 11 percent.

The poll had a 3.8 percentage point margin of error, and 27 percent of respondents said they were undecided. Businessman Gary Rabine polled at 6 percent, former state Sen. Paul Schimpf at 4 percent and attorney Max Solomon at 2 percent.

He served one term in the Illinois House in 2019 and 2020, during which his colleagues voted to remove him from the chamber in May 2020 for refusing to wear a mask in compliance with COVID-19 mitigations. The House vote was 81-27 in favor of removing him from the remainder of the day’s proceedings. 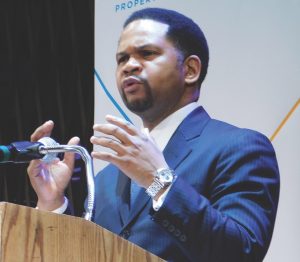 Aurora Mayor Richard Irvin is trailing in the Republican primary polls for governor.

In 2020 he was elected to the deeply conservative 55th District of the Illinois Senate with 76 percent of the vote, and he was seated in 2021. He continues to serve in the district.

“Billionaire elitist JB Pritzker is a failed governor whose extreme liberal policies have abandoned working families and taxpayers,” Bailey’s spokesperson said in a statement Friday. “Darren Bailey is a farmer and the conservative outsider we need to tackle inflation, lower taxes, improve our schools, get our economy growing, and keep our streets safe.”

Not including ceremonial resolutions, Bailey has been the chief sponsor of just two bills that successfully became law in his time in office, one doubling the fines for passing a school bus and another amending requirements for becoming a firefighter.

At a news conference called Thursday to promote legislative action abating the state’s tax on motor fuel, Bailey pointed to communication as how he would work to get things done in the General Assembly.

Bailey has received the endorsement of major anti-abortion groups, citing only a threat to the life of the mother as what he views as an exception in which the procedure should be allowed.

The Sun-Times-WBEZ poll showed 57 percent of respondents view Bailey as very or somewhat favorable as opposed to 16 percent unfavorable.

Irvin, at his Bloomington news conference, pointed to the 10s of millions of dollars being spent on attack ads against him between the Democratic Governors Association, a pro-Bailey political action committee and Bailey himself.

When pressed on his comments that a vote for Bailey is a vote for Pritzker, Irvin pointed to the spending.

“What the implication is, is that JB Pritzker is scared to face the Irvin-Bourne team, simple as that,” he said. “So he’s willing to prop up someone he’s assessed that will not be able to beat him in the general election. … Otherwise, why would he be spending 10s of millions of dollars to take me down and lift him up?”

Irvin has himself received $50 million from conservative megadonor Ken Griffin, who is founder of the hedge fund Citadel and a previous backer of one-term Republican Gov. Bruce Rauner.

Bailey’s biggest financial benefactor is Richard Uihlein, who has given the Bailey campaign $9 million while contributing $8 million to the People Who Play by the Rules PAC which has funded advertising against Irvin. Uihlein backed Rauner in 2014 before backing his Republican primary challenger in 2018.

Irvin’s campaign pointed to about $17 million in spending by the Democratic Governors Association, which has received money from Pritzker, to attack the Irvin campaign and publicize Bailey’s conservative credentials.

Asked about his plan to make up the deficit in the coming days, Irvin said it was a necessary part of the campaign, stating Democrats might spend as much as $30 million influencing the GOP primary by the time it concludes.

“In this last week alone, we’ve had 200,000 calls and texts out to residents of Illinois,” he said. “We’re on track to knock on 30,000 doors in central and southern Illinois. We’re gonna get our message out, you know, we’re gonna get it out strong.”