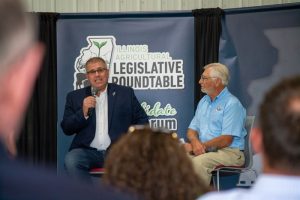 LEXINGTON – The candidates for Illinois governor faced questioning about their agriculture-related policies Wednesday, Aug. 24 in an outbuilding on a McLean County farm.

Gov. J.B. Pritzker’s message was one of optimism, billing himself as the state’s “chief marketer.” His challenger, state Sen. Darren Bailey, a Republican from Xenia, told the room full of farmers that Illinois was in a “dire situation” that needed the “grit of a farmer” to rectify it.

The Illinois Agricultural Legislative Roundtable — put together by a coalition of more than 100 of the state’s agriculture stakeholders — took place at Schuler Farms in rural Lexington. The event was moderated by Illinois Farm Bureau President Richard Guebert Jr.

Pritzker highlighted his administration’s wide-ranging infrastructure bill, defended his signature on a massive decarbonization bill and highlighted the progress toward fiscal stability the state has seen in his time in office.

Bailey, meanwhile, sought to discredit the state’s fiscal progress, dismissed the energy bill as a collection of “virtue signals” and said Illinois was starting to look like Baghdad.

The last comment came in reference to the Climate and Equitable Jobs Act, signed into law by Pritzker last year, which aims to put 1 million electric vehicles on state roads by 2030 and take carbon-emitting energy generators offline in the state by 2045.

The law seeks to accomplish that by massive ratepayer subsidies for renewable and nuclear energy and forced closure of fossil fuel plants over the next two decades.

Bailey said that law has led to a threat of brownouts in areas of downstate Illinois that are part of the MISO regional transmission organization that purchases energy capacity for 15 states. MISO representatives, however, testified at a committee hearing earlier this year that the early retirement of out-of-state fossil fuel plants, not the passage of CEJA, led to higher downstate energy prices and warnings of potential brownouts. 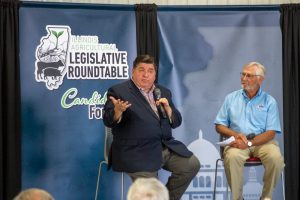 “J.B. Pritzker’s energy policies are a little more than impractical virtue signals and cannot succeed with the speed of his promises,” he said. “We all want a clear plan, but J.B. has bet the farm, he’s bet our farms, and he’s thrown snake eyes every time.”

“MISO has fallen down on the job,” he said. “That’s why Illinois had to pick up the pace in solar and wind and make sure that we’re producing more energy, not less. That is what the Climate and Equitable Jobs Act does. It helps us produce more energy.”

It was also in relation to the energy bill that Pritzker accused Bailey of lying to members of the forum about one of the provisions in the bill that the Illinois Farm Bureau had hotly contested.

The point of contention had to do with eminent domain, a process that allows governments to procure private property while giving the property owner little power other than to negotiate a price.

While the climate bill was ultimately stripped of provisions that would have given counties the power to invoke eminent domain for wind and solar projects, the final bill did include a provision that allows a private transmission line to invoke the authority in seven counties.

Democratic lawmakers at the time said the language, included on page 673 of the public act, applies to the Grain Belt Express, a transmission line owned by the private company Invenergy. The language in the bill states that a project of Grain Belt’s magnitude “shall be deemed” a public use line, giving the company the ability to invoke eminent domain if needed.

While Bailey said he believed the bill forced coal and natural gas offline too early, the eminent domain provision was enough for him to vote against it.

Pritzker, in his discussion at the forum, incorrectly claimed any eminent domain language was stricken from the bill. Asked by a reporter after the forum about the Grain Belt Express provision, Pritzker said he was “talking about eminent domain broadly.”

“What I heard was eminent domain, and that really got taken out of the CEJA at the very last day,” he said.

Invenergy, meanwhile, has held town halls and said eminent domain would be a last resort with the vast majority of their interactions with property owners ending amicably.

While the energy bill was a major topic of conversation, candidates also discussed a number of other issues, from agriculture subsidies to broadband availability in rural areas to infrastructure.

Pritzker continued to tout the $45 billion capital infrastructure bill that includes money for broadband infrastructure and all modes of transportation. It’s a program Bailey opposed while in the General Assembly.

“We’re going to be building our roads and our bridges, and our airports, and our ports all across the state of Illinois so you can more easily get your goods to market across the board,” Pritzker said. “Take note that the majority of the dollars that we’re putting into infrastructure are invested downstate.”

Bailey, meanwhile, continued to assert that state finances can be improved with “zero-based budgeting,” a concept of justifying every dollar spent up front rather than carrying over costs from a previous budget year.