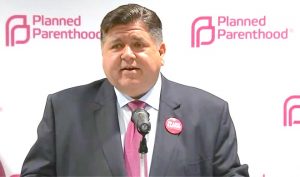 Gov. J.B. Pritzker speaks at a campaign-sponsored news conference Tuesday, Aug. 30 saying abortion rights will be a central issue in the 2022 elections. (Blueroomstream.com)

SPRINGFIELD – Democratic Gov. J.B. Pritzker said Tuesday, Aug. 30 that abortion rights will be a central issue in the 2022 election, not just in his bid for reelection but in races up and down the ballot.

That includes races for Congress and the Illinois Supreme Court as well as the governor’s race and state legislative contests.

Speaking at a news conference with officials from political advocacy arms of Planned Parenthood organizations, Pritzker said the U.S. Supreme Court’s decision in June overturning Roe v. Wade changed the focus of the 2022 elections and gave voters — particularly women — a new motivation to vote this fall.

“But make no mistake, the right wing may have taken away abortion rights from half of all Americans, but they’ve unleashed a tsunami of determined women voters and their allies who will lift up pro-choice candidates and take down the ultra-conservative fundamentalists this November,” he said.

Pritzker’s comments came as the general election cycle is just getting into full swing and the two major party candidates try to define what the central issues of the campaign should be.

So far, Pritzker’s Republican challenger, state Sen. Darren Bailey of Xenia has tried to focus the race on issues of law and order, including the high rate of violent crime in Chicago, as well issues like taxes, the economy and Pritzker’s handling of the COVID-19 pandemic.

Bailey’s lieutenant governor running mate, Stephanie Trussell, was scheduled to hold a news conference Tuesday in Chicago to focus on what the campaign called “the Pritzker administration’s failure to address rising crime and businesses shutting down and fleeing communities across Illinois.”

And on Aug. 29, Bailey released a statement calling on Pritzker to apologize to Illinois students and parents for closing schools and cancelling extracurricular activities during the COVID-19 pandemic.

The U.S Supreme Court’s decision in Dobbs v. Jackson Women’s Health Organization appears to have made abortion a top issue with Democrats in the mid-term elections. A Pew Research poll released last week showed 71 percent of Democrats view abortion as an issue that is “very important” to their vote. That was up 25 percentage points from March, before the Dobbs decision.

In Kansas, voters in that conservative state on Aug. 2 overwhelmingly rejected a proposed constitutional amendment that would have given the state’s legislature broad new authority to regulate abortion.

Elsewhere, so-called “trigger laws” quickly took effect in at least 16 states, including those neighboring Illinois, that have either banned or imposed severe restrictions on abortion access, making Illinois an outlier in the Midwest while giving Democrats here a hot-button social issue on which to run.

“At least 26 states in total are expected to move to ban abortion in the coming months, putting 40 million women and people who can get pregnant at risk,” said Alexis McGill Johnson, president of Planned Parenthood Action Fund. “Hundreds of thousands of people can no longer access the abortion care they need in their own states, and they are fleeing to places like Illinois to get care.”

Immediately after the Dobbs decision, Pritzker announced that he would call the General Assembly into special session to consider measures to expand abortion access in Illinois. Among the measures discussed is allowing nurse practitioners to perform the procedure in order to increase the number of abortion providers and giving legal protection in Illinois to providers in other states who may face disciplinary action or prosecution for performing the procedure.

Those plans, however, have been put on hold, and Pritzker indicated Tuesday that lawmakers might wait until the 2023 regular session before taking action, when it takes only a simple majority, rather than a three-fifths super majority, to pass legislation that takes immediate effect.

“So, there’s some things that can be done, could be done with a supermajority, some things that take a simple majority,” he said. “So again, the legislature is working through all those things.”