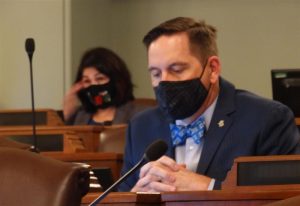 Democrats in the General Assembly released a proposed new map Friday that divides Illinois into 17 congressional districts, one fewer than it has had for the past 10 years because of the state’s population decline since the 2010 census.

The General Assembly returned to Springfield Oct. 19 for the start of their annual fall veto session, and on the following day the House and Senate Redistricting Committees held their first hearing since the proposal was released.

Ryan Tolley, policy director for the reform advocacy group CHANGE Illinois, noted that the proposal had been given a grade of “F” by the Princeton Gerrymandering Project, a nonpartisan project at Princeton University that seeks to eliminate partisan gerrymandering.

That was due mainly to its lack of partisan fairness and the fact that the proposal includes a number of oddly shaped districts that are not compact and which divide a large number of counties into multiple districts.

“Splitting a county alone does not necessarily mean that a district is gerrymandered,” Tolley said. “For instance, Cook County and DuPage County have to be split due to their population sizes being larger than what is allowed in congressional districts to meet equal population standards. However, a district map with a higher number of split counties does raise questions about what goals mapmakers set out to achieve.”

A number of other people who spoke to both committees Wednesday testified about their particular areas of the state, including residents of southwest Chicago who are currently in the 3rd congressional district.

Under the proposed map released last week, that district would be greatly reshaped, stretching farther west, reaching into Will, Grundy and LaSalle counties.

“I’ve seen the proposed congressional map, and I’m surprised at seeing the district I’ve called home for decades replaced by something unrecognizable,” said Dale Fast, who lives in the Beverly neighborhood of Chicago. “The southwest side of Chicago is a diverse place. I’ve connected with my neighbors in Berwyn, Cicero, Orland Park and many other suburbs around my home, because we have common interests. The southwest side has consistently had representation in Congress that hails from the same area, not the rural parts of the state that share less in common with us.”

Others, such as Juan Calderon, a West Side resident and chief operating officer at the Puerto Rican Cultural Center, urged lawmakers to consider drafting a map that would have two largely-Latino districts because the Latino population of Illinois grew substantially over the past 10 years while the white and Black populations both declined.

The proposed map released last week is considered a first draft and will likely be changed before being voted on in either chamber.

Both chambers of the General Assembly canceled their scheduled sessions for the remainder of this week, which means they won’t vote on a new congressional map until next week at the earliest.

Lawmakers have a lot of work ahead as they cancel sessions