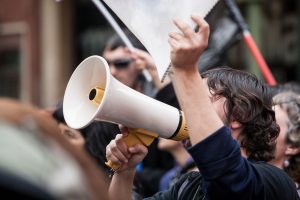 The measure prohibits state and local governments from enacting laws that interfere with a right to organize, including passage of so-called “right-to-work” laws, which prohibit requiring membership in a union as a condition of employment.

SPRINGFIELD – Illinois voters have approved a state constitutional amendment guaranteeing workers the right to organize and engage in collective bargaining.

Estimates compiled by multiple media outlets projected Tuesday, Nov. 15 that the ballot measure had support on an estimated 53 percent of the total ballots cast in the election, with more than 95 percent of the ballots counted. That’s enough for approval under one of two paths to passage for a constitutional amendment in Illinois.

The amendment, which will be added to the Bill of Rights of the Illinois Constitution, states that employees have a fundamental right to organize and bargain collectively “for the purpose of negotiating wages, hours and working conditions, and to protect their economic welfare and safety at work.”

It also prohibits state and local governments from enacting laws that interfere with that right, including passage of so-called “right-to-work” laws, which prohibit requiring membership in a union as a condition of employment.

On election night, the Vote Yes for Workers’ Rights campaign declared victory, but media outlets were slow to confirm that due to the complicated rules in Illinois for passing a constitutional amendment.

The state constitution provides two pathways for passing an amendment. It must either be approved by 60 percent of all those voting on the measure or by more than 50 percent of all ballots cast in the election.

According to projections, the amendment received about 2.1 million “yes” votes and 1.5 million votes against. That’s 58.4 percent of the votes cast on that issue but about 53 percent of all the ballots cast in the election.

“From day one, the Vote Yes for Workers’ Rights campaign has been based on the simple idea that every Illinois worker deserves better. Better pay, stronger benefits, and safer workplaces don’t just help workers thrive; they strengthen our state and keep us all safe,” Illinois AFL-CIO President Tim Drea said in a statement on election night.
The amendment will become effective once the Illinois State Board of Elections certifies results of the election. The board is scheduled to meet Dec. 5.