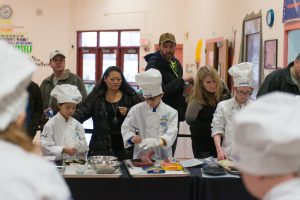 The competition is underway as the young chefs compete in the District 47 Future Chefs competition. (Scott Laudick photo)

“One day Dad asked me to help him cook,” Laudick said about how he got interested in creating meals. “I think it’s fun.”

March 19 was the second time that 10-year-old Laudick competed in the two-year-old competition. This year’s competition challenged the fourth- and fifth-graders to prepare a healthy comfort food in 30 minutes or less.

“Laudick’s Poblano Pepper Poppers impressed the judges from the start,” said Katherine Wicinski, general manager of School Services from Sodexo. Sodexo is the food service company that sponsors the event. 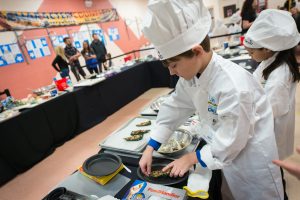 According to Wicinski, their mission is to be “world leaders in quality of daily life solutions.” Besides school lunches, Sodexo provides food services to corporations and health care facilities. The program is in its seventh year as a national event and demonstrates Sodexo’s commitment to health, well-being and support for the school districts and communities it serves.

At Hannah Beardsley, Sodexo provided the tools and ingredients to prepare their comfort foods. Sodexo also provided “production kitchen” tools like cut gloves, and lessons on how to use the tools. Each competitor got a black plate for presentation. The chefs’ creations were judged on health, presentation, taste, and ease of preparation. 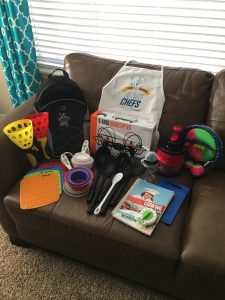 “Judges were surprised that the Poblano recipe was spicy, but not hot,” said Wicinski.

According to Laudick, that came by trial and error. “I learned the hard way,” he said. “I didn’t take the seeds out, and it was too hot. I touched my face, and everything started to burn.”

This year’s theme is healthy comfort food and students were invited to submit recipes to their school cafeteria worker for consideration.

All the on-site finalists received a framed plaque, a medal, a chef coat and apron as well as a backpack with cookbook and cooking utensils.

Laudick’s prize backpack was “chock full of wonderful prizes,” according to his mom. “Some supported cooking, others were just fun.”

Laudick’s favorite was a hydrocopter, which is a small drone which can accommodate a camera. “I had a drone, but my controller broke and I couldn’t get the drone to stop,” he said.

Laudick took second in the competition last year. To help him practice, his mother, Kristin Laudick does a Chop Challenge every week. Laudick and his friends get three to five ingredients and they must make something which includes those ingredients. They have no limitation on how to use the ingredients.

Laudick also watches “Cutthroat Kitchen,” a Food Network show where four chefs must make a meal and are incentivized to sabotage each other.

“They have a giant pantry and one minute to choose their ingredients,” Laudick said.