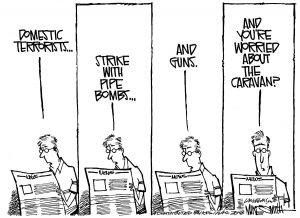 It’s not any less awful for being so familiar.

The last three high-profile attacks that have convulsed the nation, two in recent weeks, have been carried out by fringe loners who fit the stereotype of the perpetrators of such crimes precisely — they didn’t fit in, they were “off,” they kept to themselves.

The word that comes up again and again in accounts of their lives is “alone,” always alone.

The life of Cesar Sayoc, who mailed crude pipe bombs to Democrats ranging from George Soros to Hillary Clinton to Robert De Niro, was a pitiable wreck. His father abandoned his family as a child, and after dropping out of college, Sayoc lived with his grandmother. Then he went from place to place, performing as a male stripper. He compiled a record of petty crime, lost his home, declared bankruptcy. He was estranged from his family and resisted its pleas for him to get help. Sayoc lived out of his van, bizarrely festooned with pro-Trump stickers.

Not much is known about Robert Bowers, the Pittsburgh synagogue shooter, besides his vile social media postings. A childhood friend called him “pretty much a ghost.” He may have dropped out of high school. As an adult, he lived alone in an apartment, and no one ever came to see him. One neighbor said she couldn’t remember Bowers ever talking to anyone.”

The Parkland school shooter, Nikolas Cruz, was left with no parents after the death of his adoptive mother. He was expelled from Marjory Stoneman Douglas High School, where he was an outcast. He was reportedly depressed and had other behavioral problems. Police were called constantly to his home. A defense attorney called him “a broken child.”

None of this, of course, is to excuse in the slightest the heinous crimes of these men, or to deny the existence of pure, unadulterated evil. Murderous haters and kooks have been with us forever, as has anti-Semitism. Yet the social pattern is clear.

The phrase “deaths of despair” has entered the nation’s vocabulary to denote the rise of mortality among a subset of working-class whites from suicide, drugs and alcohol. Its declining longer life expectancy is one of the most stunning trends in American life. The at-risk population tends to be unmarried, disconnected from civil society, marginally employed and largely on their own.

One way to look at recent mass killings (or attempted killings) is as the handiwork of a very small, violent fringe of the socially disconnected. Their destructiveness is directed outward, in cowardly acts of mindless malice, rather than inward. They marinate in hate and proudly share their lunatic obsessions online, in a twisted simulacrum of community. They seek their identity in political extremism, Jew-hatred or the hellish idolatry of school shootings.

Their crimes are, in their diseased view, feats of grandeur. They give them a chance at perverse consequence and notoriety otherwise not available to them in their marginal lives and social isolation.

It’s evil and pathetic, infuriating and sad, and, by the looks of it, a persistent feature of 21st-century American life. What Emile Durkheim called anomie has been weaponized, and it’s horrifying to behold.