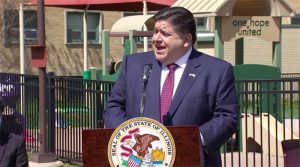 Gov. J.B. Pritzker announces Friday, April 16 that $1.6 billion in federal funding will be allocated to early childhood education and child care providers throughout the state. (Illinois.gov)

The funds will be provided through the American Rescue Plan passed by Congress in March, Pritzker announced at a news conference in Aurora on Friday, and will include $140 million in direct grants for child care providers to be dispersed over the next three weeks.

This announcement comes as the Illinois Commission on Equitable Early Childhood Education and Care Funding – which Pritzker created in 2019 — released its Ready Illinois report earlier this month with recommendations for an overhaul of early childhood funding in the state.

Pritzker referred to the funding commission’s report as a roadmap for the future of the state’s early childhood system.

“[A system] that will truly protect and nurture low income children, children in rural communities, children of color, and children with disabilities,” Pritzker said. “One that will make it much easier for parents to navigate getting assistance, simpler for early childhood programs to get funding and more responsive to local needs in the community.”

In an effort to strengthen and centralize child care, home visiting and early intervention services, Pritzker also announced a new division of early childhood in the Department of Human Services.

Also based on recommendations from the funding commission’s report, Pritzker announced a network of early childhood planning councils that will launch statewide over the next 18 months, along with the creation of an Early Childhood Transformation Team in partnership with Northern Illinois University.

The planning councils will work with the various community stakeholders to ensure the unique needs of different areas of the state are met through early childhood services, while the transformation team is intended to help move the commission and council recommendations forward.

Pritzker said implementing all of the commission’s recommendations will be an enormous task.

“What the commission proposes represents a seismic shift from the status quo for how early childhood in this state should go,” Pritzker said.

“These are changes that will be a sustained effort, and they will require significant resources, but a journey of 1,000 miles begins with a single step,” he added. “Today we are taking not just one of those steps but a few of them forward on that journey to kick off this work.”

Aside from the investments in early childhood education, Pritzker said he also hopes to advance his mission to provide affordable child care in the state.

When the pandemic first shuttered many of the state’s businesses, the Pritzker administration created an emergency pandemic child care grant program which dedicated $290 million to 5,000 child care centers and homes in 95 counties in the state. That was funded through federal COVID-19 relief dollars as well.

“This allowed them to stay afloat through a truly challenging year and that funding offered support far beyond the national standard, families in need of child care were able to lower their out of pocket cost,” Pritzker said. “The program has been so successful that we will use the first of these new American Rescue Plan dollars to provide another round of funding to it.”

Of the $1.6 billion in federal funding the state received for early childhood services in the most recent relief package, $140 million will go to child care providers through this grant program. These funds can be used to pay rent or maintain staff, supplies and training.

Sen. Linda Holmes, D-Aurora, also spoke at the news conference about the importance of investing in child care. She said it is the foundation of economic recovery from the pandemic.

“Parents may not have access to affordable child care options, which makes returning to their jobs very difficult or nearly impossible,” Holmes said. “This is the next vital part of the foundation to get people back to work and able to stimulate the economy.”