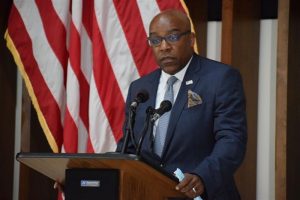 Attorney General Kwame Raoul filed a petition on Thursday, Feb. 10 asking the Illinois Supreme Court to intervene in a controversial sexual assault case that ended with a circuit judge voiding his original guilty verdict and freeing the defendant early.

Raoul petitioned for a writ of mandamus urging the Illinois Supreme Court to order Adams County Circuit Judge Robert K. Adrian to impose a lawful sentence in the sexual assault case —four to 15 years in prison.

Adrian released the defendant after he served five months in a county jail.

“The mandatory sentencing range set by the Illinois General Assembly for felony criminal sexual assault is four to 15 years in prison,” Raoul said in a written release announcing his decision to take the case to the Supreme Court. “In addition to the insensitivity to the victim in this case, the judge’s decision to vacate the conviction and call the 148 days Clinton served in county jail ‘plenty of punishment’ demonstrates an abuse of power.”

But when Clinton returned to court in January, Adrian decided to reverse his own finding of guilt and vacate the conviction. This allowed Adrian to avoid sentencing him to the minimum sentence under Illinois law. He then ordered Clinton to be released from custody. 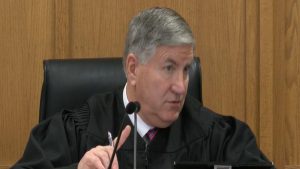 Clinton’s victim was in court and prepared to read a victim impact statement when Adrian made his decision to vacate the conviction and free Clinton.

A transcript showed that Adrian criticized the parents where the party was held.

“This is what’s happened when parents do not exercise their parental responsibilities, when we have people, adults, having parties for teenagers and they allow coeds and female people to swim in their underwear in their swimming pool,” he said, according to a transcript.

Carrie Ward, the executive director for the Illinois Coalition Against Sexual Assault, said Adrian’s statements were victim-blaming and further traumatized the victim.

“This was a turn that no one could have predicted,” Ward said. “And it underscores the issues survivors of sexual assault face.”

Clinton, who formerly lived in Quincy, turned 18 two weeks before the crime occurred. He had no previous criminal record. He currently resides in Michigan.

During the hearing, Adrian said, “Mr. Clinton has served almost five months in the county jail, 148 days. For what happened in this case, that is plenty of punishment. That would be a just sentence,” according to a court transcript.

“This is the first time I have seen a situation like this in the 20 years I have been doing this,” said Daniel S. McConkie Jr., who teaches criminal law at Northern Illinois University School of Law.

McConkie said Adrian avoided appellate review by reversing the conviction, instead of imposing a sentence that was less than the mandatory minimum.

Adrian said during the hearing that he knew that his decision would be overturned if he did that.

That leaves the case to the Supreme Court to force Adrian to impose the sentence prescribed by Illinois law.

The Supreme Court can order public officials, including judges, to follow the laws put into effect by the Illinois General Assembly.

Adrian’s handling of the case drew national media attention and an outcry from local and state advocates. The victim appeared on the nationally syndicated television show “Dr. Phil” to talk about the assault.

“We are super-glad that the attorney general took this step to try to get some justice for this victim,” Ward said. “And more than that, for the message that this sends to all sexual assault survivors.”

But Adrian could also face more challenges. A petition is circulating asking for his recall. On Friday, the petition had more than 102,000 signatures.