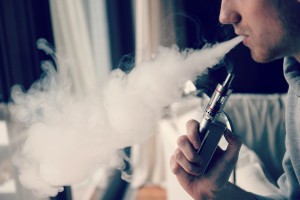 A U.S. Centers for Disease Control and Prevention survey found half of youth in the U.S. used an e-cigarette, vape pen or hookah in 2019. That trend of increasing electronic tobacco use is on par with Illinois high school student usage. (Photo courtesy of CDC)

SPRINGFIELD — The American Lung Association on Wednesday, Sept. 2 announced a “comprehensive” plan to tackle electronic tobacco use by the nation’s high schoolers.

Education, community advocacy and research are the main pillars of the association’s strategy and are methods used by tobacco opponents to curb traditional cigarette use among the age group.

“As the school year resumes, more students may experience social pressure to vape, while others may begin to vape in response to stress, including stress related to COVID-19,” Kristina Hamilton, the American Lung Association’s advocacy director, said in a written statement. “We’re already facing what the surgeon general refers to as a ‘youth vaping epidemic.’”

A U.S. Centers for Disease Control and Prevention survey found half of youth in the U.S. used an e-cigarette, vape pen or hookah in 2019. That trend of increasing electronic tobacco use is on par with Illinois high school student usage.

Approximately 8,000 students begin using a vape pen every day, the CDC found, resulting in more than one in four high schoolers and one in 10 middle schoolers vaping at least once per month.

The Lung Association launched a public awareness campaign to inform parents and adult leaders about e-cigarette facts and trends as well as strategies for speaking with students about why they should not use such products.

Officials also announced a Vape-Free Schools initiative “to help school administrators and educators address the surge of youth vaping through guidance in implementing a comprehensive tobacco use policy,” according to the association.

Instead of suspension, it suggests educators develop a substitute discipline policy and offer a tobacco cessation program.

The advocacy group also said it plans to promote legislation to include electronic tobacco products in the Smoke Free Illinois Act, which bans smoking in virtually all public places.

State Sen. Julie Morrison, a Democrat from Lake Forest, said she will introduce a measure in the 2021 legislative session to encourage youth to avoid e-tobacco products.

“We were doing so well on changing the culture of smoking, and now we have gone backward — especially the younger generation,” she said in a written statement. “While the implementation of Tobacco 21 was a major step forward in limiting the availability to tobacco products to children, there must be more education about the negative effects of e-cigarettes, so kids don’t seek to get these products in illegal ways.”