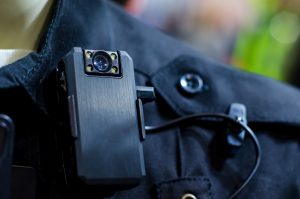 Effective dates for the body camera mandate are staggered by the size of police departments. (Adobe stock image)

SPRINGFIELD – An omnibus criminal justice bill passed by the General Assembly last month would, if signed by the governor, mandate all Illinois law enforcement agencies to use body cameras.

Despite the legislation mandating the use of body cameras, it does not contain any penalties for noncompliance. A previous version of the bill reduced the Local Government Distributive Fund —the portion of state income tax revenue given to county and municipal governments— by 20 percent as a penalty.

That provision was stripped from the final package after it was characterized as an attempt to defund the police and faced heavy opposition from law enforcement groups and municipal associations. Enough Democrats, such as state Sen. Laura Ellman of Naperville, opposed the provision in both chambers that the bill could not attain enough support to pass until its removal.

Now, instead of penalizing agencies that flout the mandate, the legislation attempts to reward compliance. Law enforcement agencies that institute body cameras by the effective date relevant to them will receive preference for grants awarded by the Illinois Law Enforcement Training and Standards Board, also known as ILETSB.

Unlike many of the other provisions in the criminal justice reform legislation, body cameras have, by and large, been supported by law enforcement. However, there are reservations about making them mandatory for police departments when the bill offers no monetary assistance.

Last October, lawmakers in the state Senate held a subject matter hearing on body camera usage as part of the preparation for crafting the eventual omnibus bill. In that hearing, representatives from the Illinois Association of Chiefs of Police testified to the prohibitive costs of body camera installation.

The body cameras themselves are relatively inexpensive. However, Illinois law requires all body camera footage be stored for at least 90 days, and body cameras must be on at all times an officer is on duty, with some exceptions. The data storage involved can create a strain on local budgets.

The city of Elgin has just over 100,000 residents, which under the legislation would require all law enforcement agencies operating within the city to have body cameras by 2023. The Elgin police department already implemented body cameras in 2015, which costs the department $170,000 each year in data storage for its force of 182 officers, according to Elgin Police Chief Ana Lalley.

In her October testimony, Lalley told lawmakers the city would not have been able to implement the program if it did not receive a $500,000 federal grant.

Currently only 75 law enforcement agencies out of approximately 900 In Illinois use body cameras.

A 2019 investigation from the Washington Post found many police departments around the country canceled or ended their body camera programs due to the cost of storage, including the East Dundee Police Department in the suburbs of Chicago. The small village with fewer than 5,000 residents, which under the law would be required to implement body cameras by 2025, did not want to pay $20,000 annually to maintain storage for its 20 police officers’ camera footage.

With no actual penalty for noncompliance and no financial assistance being offered by the law, it’s unclear how successful the provision will be in encouraging the adoption of body cameras

A spokesperson for Republican state lawmakers said with the inclusion of the unfunded mandate “it can be argued they are setting the officers up to fail.” GOP lawmakers and law enforcement groups have repeatedly called on Gov. J.B. Pritzker to veto the legislation once it arrives on his desk.

The primary sponsors of the bill, Chicago Democrats Sen. Elgie Sims and Rep. Justin Slaughter, have said issues of funding and budgetary constraints for law enforcement can be addressed in follow-up legislation in the new legislative session.

In a statement released on its website in January, ILETSB wrote, “We anticipate (the body camera law) will increase demand for our existing camera grant program and have asked that funding for this program be increased.

“We trust that in the upcoming months, discussions on this topic will be fruitful. We remain focused on the Board’s role in ensuring that Illinois’ law enforcement community has the training and resources to better serve the people of this State.”