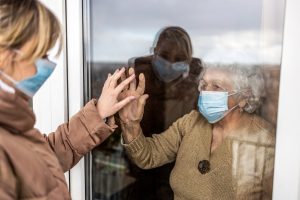 Senate Bill 1405 states a health care facility must ensure “an opportunity for at least one visitor to visit a resident or patient,” even amid a gubernatorial disaster declaration. Guidelines set by the health care facility, U.S. Centers for Medicare and Medicaid Services, and the CDC would need to be followed.

SPRINGFIELD – The Illinois House advanced a measure Monday, April 4 that aims to ensure nursing home patients have a right to visitors even amid a public health emergency.

Senate Bill 1405 states that a health care facility must ensure “an opportunity for at least one visitor to visit a resident or patient,” even amid a gubernatorial disaster declaration. A clergyperson would not count against the limit.

Health safety guidelines set by the health care facility, U.S. Centers for Medicare and Medicaid Services, and the Centers for Disease Control and Prevention would need to be followed for entry. And the person seeking entry may be required to pass a health screening.

Rep. Chris Bos, R-Lake Zurich, the bill’s chief House sponsor, said the legislation would give local control to the health care facilities. Bos also said it is in response to constituents who were upset that they could not visit family members in health care facilities during the COVID-19 pandemic due to Gov. JB Pritzker’s executive orders.

Bos said facilities would still have to comply with local health department guidance as well.

Early in the pandemic, Pritzker issued an executive order restricting visitation of those in health care facilities during peak transmission periods to help prevent the spread of COVID-19.

Rep. Carol Ammons, D-Urbana, expressed concern that the bill would lead to a repeat of executive orders being challenged with lawsuits.

“The reality is, when you have a worldwide pandemic, the governor has to have the ability and the authority to make the decision that is in the best interest in the state,” Ammons said.

She was one of three Democrats voting against the measure, along with Chicago Reps. Will Guzzardi and Greg Harris, as it passed on a 105-3 vote with three lawmakers not voting.

Ammons said that she understands that Bos was aiming to ensure family members are not alone during a public health crisis but that the bill “usurps the governor’s authority.”

At a news conference Tuesday morning, Pritzker said the pandemic won’t likely be the last one the state faces, and he wants to ensure laws that are put in place are appropriate going forward to ensure the most vulnerable are safe.

He didn’t say whether he would sign the bill or offer any amendatory veto, should the Senate concur with the House amendment to the bill.

Rep. Dan Ugaste, R-Geneva, said despite disagreements on the governor’s authority when it comes to declaring executive orders, the intention of the bill is not about questioning the governor’s executive authority.

“There are those in this state who did not get to see their loved ones for months on end once this pandemic started, prior to their family member passing away,” Ugaste said.

In an emotional speech urging his colleagues to vote for the bill, Ugaste said that his wife was not able to see her mother for three-and-a-half months before passing away. He said that his wife and her mother would talk on the phone three times a day, even to just say hello, and that when she went in to say a final goodbye, her mother was “completely comatose.”

“If you had any idea what that does to an individual, as I watched my wife go through this for the past two years since her mother passed away, you would vote for this bill,” Ugaste said.

The bill states that health care facilities may deny access to visitors who do not pass the health screening or follow the health guidelines if it endangers the health or safety of a patient, visitor or health care worker.

Rep. Mary Flowers, D-Chicago, said when her mother was in a nursing home, she was not able to visit and that she would not have put her mother there if she knew beforehand that they did not have the proper equipment to prevent the spread of COVID-19.

“I don’t think anybody should ever stand in my way, or your way, or anybody else’s if we want to get our loved ones out of a place that is unsafe,” she said.

The bill passed the Senate unanimously Feb. 24 and will head back to the Senate for final approval of a House amendment before being sent to the governor.

Deal may be near on nursing home payment reform