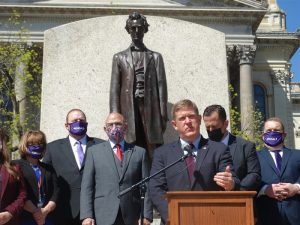 SPRINGFIELD – A bipartisan group of lawmakers are backing legislation that seeks to modernize the way the Illinois State Police processes and issues Firearm Owners Identification cards and Concealed Carry Licenses, a change that supporters say would speed up the process and improve public safety.

It would also provide for automatic renewals for people who voluntarily agree to submit fingerprints. And it calls on ISP to develop an internet portal in which state, local and federal law enforcement agencies could access information about people whose FOID cards have been revoked or suspended.

“What this would do is, it really would modernize the FOID card,” Rep. Jay Hoffman, D-Swansea, lead sponsor of the House bill, said during a news conference Wednesday. “This is an initiative of the Illinois State Police, and eventually we will have digital FOID cards, which I guess wouldn’t be a card at all, would it? It would be on your phone.”

ISP Director Brendan Kelly said the agency was inundated with new and renewal FOID card applications last year, which he attributed in part to the “social tensions caused by civil unrest and the global pandemic.” From 2017 to 2020, he said, FOID card applications grew 167 percent, from roughly 166,000 to 460,000.

The surge in applications over the last year stretched ISP’s resources, resulting in a massive backlog of applications that have not been processed within the required 30-day time frame.

“And really, I tell people that other than unemployment issues, FOID issues are the biggest calls I get in my office,” said Sen. David Koehler, D-Peoria, lead sponsor of the Senate bill.

Kelly said the agency has made significant progress in reducing that backlog, primarily by hiring additional staff and improving internal processes to be more efficient, but he said the entire system needs to be modernized to meet current demands.

The bill had support from at least five Republican lawmakers as cosponsors as of Wednesday afternoon.

Gun safety advocates, on the other hand, said in a statement that the bill does very little to improve public safety, mainly because it does not include provisions such as universal background checks and required fingerprint checks for all gun purchases.

She noted that current law requires unlicensed gun dealers to see a valid FOID card but does not require them to run background checks to verify a potential buyer’s mental health or criminal history.

Kelly, however, defended Illinois’ current FOID card system, noting that in calendar year 2020 alone, more than 15,000 FOID cards were revoked and more than 5,100 unlawful attempts to purchase firearms were stopped.

Kelly also said the agency is not requesting any change in the fee structure for either license.