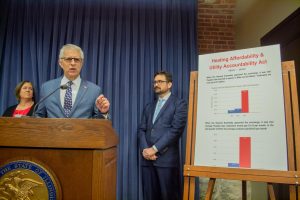 Bob Gallo, state director of the senior advocacy group AARP, speaks at a news conference Tuesday at the Capitol in Springfield to argue for a policy change which he said would lower energy costs. Also pictured are Rep. Joyce Mason, D-Gurnee, and Abe Scarr, Illinois PIRG director. (Photo by Jerry Nowicki/Capitol News Illinois)

SPRINGFIELD — A 2013 state law allowing utilities to tack natural gas surcharges onto consumer bills for the purpose of funding infrastructure improvements is under scrutiny at the Capitol.

Sen. Ram Villivalam, D-Chicago, said his Senate Bill 3497 and its companion House Bill 5247 are aimed at starting “a conversation centered on the accountability, the safety, and the affordability of utility bill increases that our families are facing in the state of Illinois.”

He was joined by Rep. Joyce Mason, D-Gurnee, who sponsors the House bill, and representatives of AARP Illinois, the Citizens Utility Board, the Illinois Public Interest Research Group (PIRG) and the Environmental Law and Policy Center. They’re among more than 20 groups supporting the effort.

The coalition criticized a 2013 state law which allowed for Qualified Infrastructure Plant, or QIP, surcharges to be applied to consumer bills. The measure was written to allow utility companies to replace outdated pipes, including cast iron piping that was an explosion risk.

“Seven years ago, the Illinois Legislature gave gas utilities permission to charge their customers more in order to make urgent repairs, such as replacing old cast iron pipes — repairs that were needed to keep us all safe,” Mason said. “Unfortunately, instead of just making the necessary safety repairs, the utilities are now spending money on things like installing new meters and replacing perfectly safe pipes and we’re all getting stuck with this bill.”

The coalition said that “regulatory shortcut” allows the utilities to recoup infrastructure spending more quickly by charging ratepayers once the new infrastructure is up and running. They also said, however, the process does not require the rigorous regulatory investigation that a regular effort to adjust consumer bills does.

Illinois PIRG Director Abe Scarr said while there is a reconciliation process each year in which utility companies “get some review” for their QIP spending, he said “that’s mostly an accounting exercise, not an accountability exercise.”

“No one here is suggesting that we compromise the safety of our infrastructure. No one here is suggesting that we need to look at the types of jobs that are being utilized or are being worked on here,” Villivalam said. “… We want this work to be done; how it’s done and at what rates and at what expense of our consumers, that’s the question that we’re trying to address and have a conversation about.”

Mason said the General Assembly was told in 2013 by Peoples Gas, which serves customers in Chicago, that the program would cost about $1.14 per month on a consumer bill or about $2 billion total. Currently, she said, that company is charging a fee greater than $9 per month and the estimated cost of the program is nearing $11 billion. 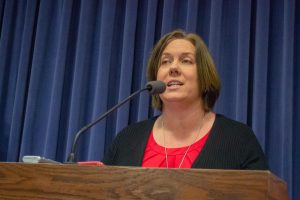 Rep. Joyce Mason, D-Gurnee, speaks at a news conference March 3 at the Capitol in Springfield to argue for a policy change which she said would lower energy costs. (Photo by Jerry Nowicki/Capitol News Illinois)

In a statement, a spokesperson for the company pointed to a 4 percent rate cap on what can be recovered by the utility in a year, and said the “urgent need for the System Modernization Program has recently been confirmed by an independent engineering study ordered by the Illinois Commerce Commission.”

“The study found that over 80 percent of the pipes in the Peoples Gas delivery system – some more than 100 years old — have an average remaining life of less than 15 years, and the SMP will increase public and customer safety by significantly reducing risks in Chicago’s natural gas delivery network,” said Danisha Hall, director of corporate communications for the company.

She added the average cost of a consumer bill is 6 percent lower than it was six years ago when the law was passed.

Nicor gas, which serves some of western Illinois and from the Chicago suburbs to as far south as Champaign and Pike counties, has already replaced its cast iron pipes but still plans to spend $1.6 billion in the next two years, according to the coalition. This created $260 million in rate hikes the past two years, according to the coalition’s news release.

“While we have made great strides in these modernization efforts – retiring the last known cast iron in our system in 2018 — as of 2020, we still have more than 4,500 miles of natural gas main that is more than 60 years old. Investing in Illinois, or investments in QIP, allows us to continue to make these investments to ensure every customer’s energy needs are met safely and reliably now and well into the future,” Nicor Communications Manager Jennifer Golz said in a statement.

She said gas bills for Nicor customers are typically 16 percent lower than they were in 2010. She also questioned the $1.6 billion in spending over the next two years, noting that about half that sum would include “other capital investments such as fleet vehicles, buildings and our Meter Modernization project.”

The coalition said Ameren Illinois, which serves three quarters of the state down to near its southern border, claimed it would spend $330 million on capital projects, but has already topped $466 million.

“By claiming that Ameren Illinois has no clear public safety justification for making system improvements, these groups are willfully ignoring a federal law which requires natural gas utilities to implement pipeline safety upgrades by 2035,” she said. “This includes upgrades to transmission and distribution lines and improved technology to maintain proper pressurization of the system.  Ameren Illinois will continue to do our part to help strengthen the safety, reliability and integrity of the natural gas distribution system every day for the customers that rely on us.”