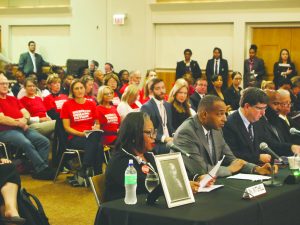 Brenda Mitchell testifies about the effects of gun violence before a U.S. congressional subcommittee Oct. 3 in Chicago, with a picture of her late son, Kenneth, in front of her. Kenneth Mitchell was shot and killed outside a Matteson sports bar in 2005. (Photo by Kevin Beese/Chronicle Media)

Brenda Mitchell sent one of her sons, Kevin, off for a tour of duty in Afghanistan. It was her other son, Kenneth — living in south suburban University Park — whose life was tragically cut short by gunfire.

“I never would have imagined Kenneth would be the one to die from an act of gun violence, right here in a free country,” Mitchell told members of a congressional subcommittee in Chicago on Oct. 3 to hear from witnesses regarding gun violence that has plagued the Chicago area.

Kenneth Mitchell was killed Super Bowl weekend 2005 outside a Matteson sports bar after intervening in a fight. A stray bullet struck and killed Mitchell.

“I got a call in the middle of the night that no parent wants to receive. I was told my son Kenneth had been hurt in a shooting and he was lying at the scene with a sheet over him,” Mitchell said.

Brenda Mitchell, a pastor in the South Suburbs, said her life shows that trauma, Post Traumatic Stress Disorder and grief have lasting effects on individuals touched by gun violence. She said it is time to begin the narrative around trauma-informed care.

“We are the walking wounded with sores that will never heal,” Mitchell told the congressional panel convened at Kennedy-King College.

Spencer Leak Sr., president and CEO of Leak and Sons Funeral Home, said he oversees at least two funerals a week of young people killed in his Chatham neighborhood of Chicago.

“It is black-on-black gun violence,” Leak said. “There is so much evil in its wake.”

Thirty years ago, Leak headed the Illinois Department of Corrections. He said the biggest difference between then and now is that in the past murders sent to state prison knew their victims.

Leak said changes have to start in schools, with students learning about citizenship and values as part of their education. He said God is needed in the classroom more than ever.

“We need to create an environment in schools that teaches morals,” he said. “Teach them about government so they are good citizens in the future. We would save hundreds and thousands of lives.” 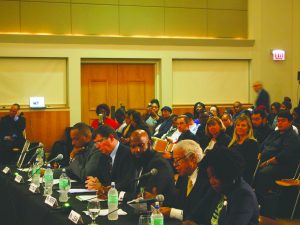 Spencer Leak Sr. (white hair), president and CEO of Leak and Sons Funeral Home, tells a congressional subcommittee about the effects of gun violence. He said he oversees at least two funerals of young people a week at his funeral home in Chicago’s Chatham neighborhood. (Photo by Kevin Beese/Chronicle Media)

Niva Lubin-Johnson, a Chicago physician and immediate past president of the National Medical Association, noted that gun violence is one of the leading causes of death in America, with 39,000 people dying by gun violence every year and 85,000 more suffering nonfatal gun injuries. She said that gun violence costs the American economy $229 billion annually.

Lubin-Johnson said the NMA is calling on the federal government to immediately convene a bipartisan commission to evaluate steps to reduce and eventually eliminate gun violence utilizing a public health approach.

“Gun violence is a national epidemic; and it undermines the public health and safety of our communities,” said Rush, who lost a son to gun violence. “This epidemic has had painful consequences for far too many families in Chicago — especially here, in my district — as well as around the country.”

U.S. Rep. Adam Kinzinger (R- 16th) said the gathering was important to hear from the Rev. Mitchell, Leak and others to put a human focus on the issue.

“It is important to see how gun violence affects families,” Kinzinger said. “The human element can get minimized with all the statistics … I believe evil is a very real thing.”