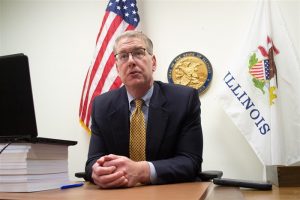 Senate Minority Leader-elect John Curran sits for an interview in his Springfield office Wednesday, Nov. 16, one day after his caucus chose him as their next leader. He said in the interview his goal is to bring “balance” to state government. (Capitol News Illinois photo by Jerry Nowicki)

SPRINGFIELD – Senate Minority Leader-elect John Curran will take over a caucus that’s more than doubled in size by the majority-party Democrats.

“Because we’re going to produce better results with that balance for working families throughout all Illinois communities,” Curran said in an interview with Capitol News Illinois on Nov. 16, one day after being chosen as the GOP’s next minority leader.

The Republican from southwest suburban Downers Grove has served in the General Assembly since 2017. In January, he’ll take over for Minority Leader Dan McConchie, a Hawthorn Woods Republican who was chosen for the post in November 2020, but whose caucus chose a new route by electing Curran last week.

“There’s no pivot,” Curran said. “We all sit at one table, this is a few people changing seats, just a couple of different roles as we go forward. But, you know, really, this is about us being a unified caucus.”

Curran brings a track record of working with Democrats to his leadership role as the caucus looks to navigate a likely 40-19 Democratic majority.

“Our obstacles are the lack, at times, of the majority party to respect and include the minority party in a meaningful manner in public policy discussions,” Curran said. “I, as an individual legislator, have found ways to have some meaningful participation in that process and getting members of the other side of the aisle to respect my policy objectives and getting them included in the ultimate product. We need to do that as a caucus.”

He was the lone Republican standing with Democrats in Springfield when the governor signed a health care reform backed by the Illinois Legislative Black Caucus in 2021. He was also a lead voice in an effort to drastically curtail allowable emissions of ethylene oxide in Illinois, a cancer-causing gas used in medical supply sterilization that’s been tied to an elevated cancer risk in the Willowbrook area.

“Members of both sides of the aisle worked collaboratively to solve that public health crisis,” he said. “If you’re not safe in your community, either from a health perspective, or a public safety, personal safety perspective, you know, we’re failing you.”

When Democrats worked to pass a transformative energy policy, the Climate and Equitable Jobs Act, that subsidizes renewable and nuclear generators while aiming to take fossil fuel producers offline in the next two decades, Curran was one of two Republicans casting a “yes” vote.

“Reliable, sustainable energy is one of the imperatives that we have,” he said. “We had to have those nuclear plants on. And that’s where I came down to that issue. We need nuclear energy in the state of Illinois. It is clean. It is reliable. And quite frankly, that is one of the large advantages we have.”

“We have some great benefits that attract employers to Illinois,” he said. “We have a lot of promise, but we also have some regulatory matters we have to address to continue to grow and attract more investment and more jobs to Illinois.”

A former assistant Cook County state’s attorney and DuPage County Board vice chairman, he was the lead Senate GOP voice on ethics reforms passed in 2021. While House Republicans quickly called news conferences to call that bill watered down and ineffective, Curran at the time appeared with Democrats and spoke to reporters individually about how he worked with the majority party to strengthen the bill.

He has also been an opponent of the criminal justice reform known as the SAFE-T Act, arguing that while he’s not opposed to ending cash bail, he believes the system that will replace it has several shortcomings.

“This was an extreme piece of legislation,” he said. “It was weighted greatly towards the extremes of their base and it jeopardizes public safety. Republican involvement in that process will help balance that out. There’s no reason we can’t be fair and just and at the same time protect public safety.”

Aside from a message of balance, he said he’d be active in Republican fundraising, aiming to diversify donations from just one or two megadonors. In recent election cycles, the two major funders of the state GOP were shipping magnate Richard Uihlein and hedge fund billionaire Ken Griffin, who recently moved his business to Florida.

While Uihlein’s money has frequently been used to elevate the party’s more conservative voices, such as state Sen. Darren Bailey, who lost the election for governor by a wide margin to incumbent Democrat J.B. Pritzker, Curran said it helped the Senate GOP.

“Mr. Uihlein, we were very fortunate, invested heavily in the Illinois Senate Republican candidates, and these were not extreme candidates. These were candidates modeled to represent the districts they were running in,” he said. “Certainly, we welcome Mr. Uihlein’s investment in our cause, but we certainly, as we look forward, need to diversify our fundraising.”

Curran’s interview came one day after former President Donald Trump announced another bid for the White House in 2024. The former president, who is a subject of multiple criminal investigations, lost Illinois in both of his elections by 900,000 to more than 1 million votes.

But Curran said he didn’t think Trump’s announcement would make his job harder.

“Any national figure should not frame who the Illinois Republican Party is to our citizens that we seek to represent,” he said. “So, we need to be strong enough and we are strong enough to present ourselves in a manner that that leads to meaningful participation in the state.”

“We have to do a better job on the abortion messaging,” he said. “You know, the reality is, what else can we do here in Illinois? The laws of Illinois are more weighted towards guarantees of the rights to have an abortion than any other state in the nation. There’s no further to go.”