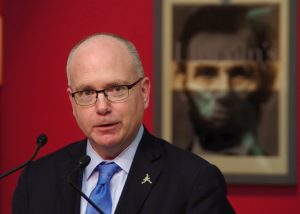 Alan Lowe, the former executive director of the Abraham Lincoln Presidential Library and Museum in Springfield, was fired in September by Gov. J.B. Pritzker. A report released Friday by the state inspector general’s office was critical of Lowe’s handling of the lending of one of five Gettysburg Address copies in 2018 to a nonprofit organization founded by conservative commentator Glenn Beck. (Abraham Lincoln Presidential Library and Museum photo)

SPRINGFIELD — Just eight days after a nonprofit organization founded by conservative commentator Glenn Beck requested it be lent a priceless, handwritten copy of the Gettysburg Address to display at a “pop-up” museum in Dallas, Texas, the staff at the Abraham Lincoln Presidential Library and Museum had the document packed and ready to move.

The man who is said to have overseen and expedited that loan was fired in September by Democratic Gov. J.B. Pritzker, and the state’s Office of the Inspector General released a damning report Friday revealing it recommended that termination.

“The people of Illinois are fortunate that the Gettysburg Address and other artifacts ultimately returned safely to the ALPLM in June 2018, despite the risks that were taken,” the report concluded.

The report details that former ALPLM Executive Director Alan Lowe “mismanaged” the museum by lending one of five existing copies of the Gettysburg Address that was handwritten by President Abraham Lincoln — which is valued at $20 million — to Mercury One, “an inexperienced, unaccredited, and unknown museum.”

The report said Lowe was contacted by Beck, who was interested in helping the museum pay down approximately $9 million in outstanding debt remaining from a $25 million purchase of what is known as the Taper collection in 2007.

The museum eventually received $50,869.60 in proceeds from the loan.

But the report said the risk far outweighed the small reward. The move was allowed despite a lack of written security and storage details about the destination facility, according to the report, which also said the document was handled by untrained professionals. It’s installment at the Mercury One facility was also apparently livestreamed on Facebook.

According to investigators, Lowe said the loan to Mercury One was also about publicity.

“When asked how the loan benefitted the State of Illinois, Mr. Lowe said that the people of Illinois want the ALPLM to be a nationally and internationally recognized institution, rather than a ‘mom and pop shop, where people come and look at a cabinet of curiosities,’” according to the report.

But several circumstances surrounding the loan — its quick turnaround, Lowe’s unwillingness to listen to staff, problems with the insurance certificate and lack of documentation — led investigators to call for Lowe’s immediate removal.

According to the report, Historic Preservation Agency standards were put in place in 2013 to prohibit any future loans of the Gettysburg Address because of its age, worth and condition. That agency, however, was abolished by executive order in 2017 by former Republican Gov. Bruce Rauner.

While that executive order made ALPLM its own state agency directly responsible to the governor, it also called for the governor to appoint a board of trustees to oversee the museum. No appointments to that board were made at the time of the loan, however, and the governor’s office was apparently not consulted, according to the report. 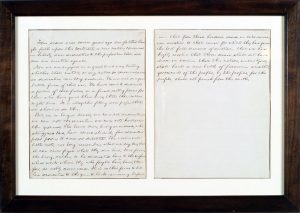 According to testimony outlined in the report, Lowe used the absence of a board to justify his complete control over the lending process. Pritzker has since appointed all 11 members to the board, which is led by former U.S. Congressman Ray LaHood. It will oversee the appointment of Lowe’s successor.

Carla Smith, the museum’s registrar, testified, according to the report, that most loans require at least six months’ advance notice before an item can be released. The Gettysburg Address was released eight days after an informal request was made.

Smith also testified that the museum never received a Standard Facility Report from Mercury One. That document is an industrywide report detailing storage plans, humidity levels, security precautions and other important aspects of the receiving facility which are expected to be completed if any loans are to take place.

The report also noted that Lowe and Michael Little, then the museum’s chief operating officer, accepted travel and lodging reimbursements from Mercury One on a trip they made to Texas for the unveiling of the exhibit. Per the report, those reimbursements were accepted without approval from ethics officers.

“Both Mr. Lowe and Mr. Little travelled to Texas at Mercury One’s expense in June 2018; neither took the time to oversee the Gettysburg Address and other artifacts being uncrated, installed, or repacked while they were there, but rather were there in ‘marketing mode,’ engaging and interacting with people Mercury One brought in for the exhibit. These networking opportunities may have provided Mr. Lowe connections for his consulting business, and likely led to employment for Mr. Little at Mercury One,” according to the report.

Little, who was later hired by Mercury One, was also found to have “intentionally interfered with an (inspector general’s office) revolving door investigation conducted under the Ethics Act,” by claiming he had no contact with Mercury One employees in the year prior to his Dec. 5, 2018, departure as a state employee.

“Those statements were false. To the contrary, over less than three months in 2018, Mr. Little exchanged approximately 53 emails with Mercury One staff, including his new supervisor, Mercury One Executive Director Suzanne Grishman, about matters unrelated to his prospective employment at Mercury One,” the report stated.

The report also found that Lowe maintains a consulting business related to archives, museums, and public policy centers, and has served on an advisory board for Mercury One since 2018, “at the same time he continued advocating for the ALPLM to make additional loans to Mercury One.” The report said Lowe, who was hired in 2016 to lead the ALPLM, denied receiving any compensation from Mercury One.

Two further loans for Lincoln artifacts to the company were denied by ALPLM in 2018 and 2019 due to new protocols that were put in place after the Gettysburg Address loan.