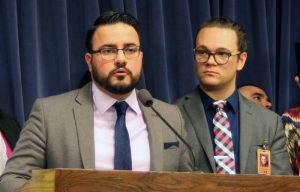 SPRINGFIELD – The Illinois Senate voted April 29 to pass House Bill 2877, which aims to extend emergency protections to renters and homeowners financially impacted as a result of the COVID-19 pandemic.

It needs only a signature from Gov. J.B. Pritzker to become law after passing the House last week.

The bill, known as the COVID-19 Federal Emergency Rental Assistance Program Act, primarily aims to provide assistance to renters and landlords by distributing federal funds through the Illinois Housing Development Authority to support renters who have been unable to make rent payments as a result of pandemic-related economic hardship.

The bill also requires all eviction records filed due to financial hardship to be sealed through Aug. 1, 2022, and implements a temporary stay of certain foreclosure proceedings and filings.

The eligibility and application process to receive support is set by the federal government, with additional eligibility set forth by IHDA.

Chief Senate sponsor Omar Aquino, D-Chicago, said the primary goal of the bill is to “keep people in their homes” for the remainder of the pandemic.

“(The bill) tries to prioritize and surgically utilize the money … we’re getting from the federal government to assist those people that truly need it the most,” Aquino said during debate on the bill Thursday.

While Gov. JB Pritzker has issued successive monthly moratoriums on evictions due to financial hardship during the course of the pandemic, proponents of the bill said the protections offered by the legislation would benefit renters most at risk of eviction due to losing their jobs or other factors.

Pritzker has stated that subsequent eviction moratoriums will be largely dependent on additional emergency funding from the federal government.

HB 2877 would aim to distribute approximately $1.4 billion in emergency assistance made available to the state by the federal government.

“We know once the moratoriums are lifted, there are going to be a lot of eviction requests out there,” Aquino said. “We are trying to stabilize our economy and communities that cannot afford another collapse of the housing market.”

According to information from the Illinois Department of Human Services, an estimated 60,000 Illinois households are vulnerable for eviction in 2021 as a result of the pandemic.

Rep. Delia Ramirez, D-Chicago, initially introduced a version of the bill at the outset of the pandemic last year, and again during the General Assembly’s lame duck session in January.

The previous version of the bill failed to be called in the Senate before the end of the lame duck session in January despite passing on the House floor. Ramirez attributed the delayed passage to lingering concerns from the real estate and banking industries which have since been resolved.

Ramirez, who again served as the chief sponsor of the bill in the House, said she was “relieved” by the bill’s passage in the Senate on April 29, saying it carries “major” impact for renters around the state.

“We know that when the eviction moratorium is lifted, and it’s coming soon, there will still be thousands of families in eviction court, most of them because of COVID,” Ramirez said in a phone call with Capitol News Illinois.

Ramirez said the bill’s provision sealing eviction court records would be key to allowing renters to move to a new place of residence without a previous eviction that was out of their control appearing on their record.

“It allows for people to be able to move to their next place without having to worry the burden of this record during what’s been, to all of us, the worst experience of our life,” she said.

During Senate debate, Sen. Jason Barickman, R-Bloomington, raised concerns about language in the bill which directs IHDA to make “best efforts” to prioritize rental assistance to areas disproportionately impacted by COVID-19 cases, a documented history of homelessness, or a significant amount of rental arrears.

Barickman said that could lead to certain renters being prioritized over others.

“We’re going to use the sponsor’s words, also in the legislation, a state agency who uses its best efforts to prioritize people based on where they live,” Barickman said. “I think that’s wholly unfair.”

“I listened to the governor. The governor told all Illinoisans ‘we’re in this together.’ But what I see in a bill is something that says, ‘no we’re not,’” he added.

Both Aquino and Ramirez responded that while the bill encourages IHDA to prioritize renters based on those provisions, it is not required, and the language is instead intended to direct funding to those who need it most.

“People always complained that we don’t hear enough from the agencies on how they’re administering,” Ramirez said. “This bill is going to make sure that IHDA is giving us reporting on how this funding is being distributed.”

Bob Palmer, policy director for Housing Action Illinois, said his organization’s focus, after advocating for the bill’s passage, will now shift to encouraging Gov. Pritzker to sign it “as quickly as possible” due to the time-sensitive nature of distributing housing assistance funds.

Palmer also said the bill could set an example for other states.

“We’re hoping governor Pritzker signs the bill very soon, and we do feel that the eviction sealing provisions can be a good model for other states to look at going forward to reduce the long-term negative impact that evictions have on people’s ability to be successful in your life,” Palmer said.