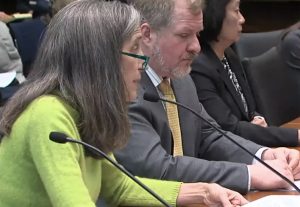 Susan Mudd of the Environmental Law and Policy Center testifies before a state Senate Committee looking at how the allocation of money from the Volkswagen settlement will be spent. Mudd said the Illinois Environmental Protection Agency’s proposed plan for settlement funds only focuses on short-term gains. “IEPA does not appear to have considered long-term benefits,” Mudd said. (Blueroomstream.com)

(First in a series looking at how money from the Volkswagen Clean Air Act settlement will affect Illinois residents.)

If you won a lottery jackpot, it is likely that creating electric car charging stations would not be high on your list of priorities.

The same can be said for the Illinois Environmental Protection Agency, which has come into a lottery-type windfall as part of the Volkswagen lawsuit settlement.

While the national settlement allows for as much as 15 percent of a state’s allocated funds to go to electric vehicle infrastructure, the IEPA has opted to go a different route with the $108 million the state is getting from the Clean Air Act civil settlement, much to the chagrin of state-wide environmental groups.

Rebecca Judd, clean energy advocate for the Sierra Club’s Illinois Chapter, noted that Minnesota, Michigan and Ohio are all putting the maximum 15 percent of settlement funds into electric vehicle infrastructure.

“Sierra Club urges Illinois not to get left behind investing in a clean transportation future,” Judd said at a state Senate Environment and Conservation Committee hearing on the settlement funds last week. “The maximum 15 percent of the VW funds should be dedicated to light-duty EV infrastructure, along with additional pollution reduction through electrification of the transportation and public transit sector.

“Illinois EPA must ensure the VW funds are used to protect vulnerable populations and environmental justice communities from the impacts of air pollution by investing in transit agencies and a rapid transition to clean, zero-emission technology.”

The IEPA has proposed that 65 percent of the VW funds go to off-road efforts to reduce air pollution, such as new engines for Metra trains.

The $108 million windfall stems from Volkswagen AG and certain of its North American subsidiaries entering into a multi-billion settlement with the federal government for violations of the Clean Air Act. VW publicly admitted to installing “defeat devices” in certain diesel vehicles causing the vehicles to operate differently during emission testing compared to normal operation, circumventing federal vehicle emission standards.

In its plan for settlement funds, the IEPA proposes:

Susan Mudd, senior policy advocate for the Environmental Law and Policy Center, said the IEPA plan does not commit a single dollar to electric vehicle infrastructure. She said the mitigation plan puts short-term gains at the forefront.

“IEPA does not appear to have considered long-term benefits,” Mudd said.

She said by focusing so much money on off-road projects, the IEPA is missing the “immense on-road needs of urban transit riders in Chicago, Metro East and Downstate Illinois.”

“Many of our most vulnerable residents live in the state’s ozone non-attainment areas — Chicago and Metro East,” Mudd said. “IEPA has ignored, predominantly, their transit needs.”