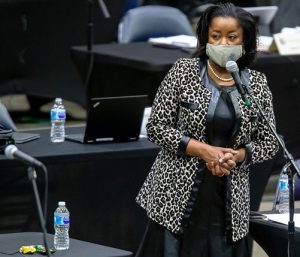 Rep. Sonya Harper, D-Chicago, takes questions on the floor of the Bank of Springfield Center where the Illinois House hosted its lame duck legislative session from Jan. 8-13. Harper was the sponsor of several economic equity measures backed by the Illinois Legislative Black Caucus. (Photo by Justin Fowler/Springfield State Journal-Register)

Editor’s note: This story is part of an ongoing “Lame Duck Look Back” series in which Capitol News Illinois is following up on the major bills that passed both chambers of the General Assembly in the Jan. 8-13 lame duck session.

SPRINGFIELD – Among the many measures passed in the lame duck legislative session earlier this month was a bill preventing employers from discriminating against people with criminal conviction histories.

Sponsored by Rep. Sonya Harper, D-Chicago, Senate Bill 1480 was one of four bills under the economic access, equity and opportunity pillar of the Illinois Legislative Black Caucus’ agenda aimed at addressing systemic racism. It passed the House with 70 votes and the Senate with 31, and will require only a signature from the governor to become law.

The bill also amends the Equal Pay Act among other provisions, but much of the discussion in the Illinois House centered on the protections of criminal records. Opponents of the bill said it would complicate and delay the hiring process and create liability for employers.

Specifically, the bill would make it a civil rights violation for an employer to use an individual’s conviction record as a basis to refuse to hire or terminate employment, unless there is a “substantial relationship” between the criminal offenses and the employment position the individual is seeking.

Opponents were critical of the bill’s definition of “substantial relationship,” which means the job “offers an opportunity for the same or similar offense to occur.” Employers may also consider “whether the circumstances leading to the conduct for which the person was convicted will recur in the employment position.”

The language also allows for disqualification if hiring the candidate is deemed an “unreasonable risk” to property or the public.

While the Illinois Retail Merchants Association did not oppose the bill, president and CEO Rob Karr said he had questions about the workability of its provisions.

“No one can show that (a similar offense could recur),” Karr said in an interview. “If you were convicted of embezzlement, I can’t predict that is ever going to happen again, but I probably should be careful about keeping you in a bookkeeping role.”

Karr said changes suggested by IRMA were not accepted by the bill’s sponsors.

“We don’t mind the direction, we just need to make it workable but also provide some protection (for employers),” he said.

“That is a nightmare and a huge liability risk because it means there is no predictability,” Mazzochi said. “There’s going to be a fight over what qualifies as substantial or not and what’s reasonable or not because those are not going to be clear standards.”

Harper disagreed, pointing to the bill’s stated process that employers must follow.

The bill requires employers to — before making a preliminary disqualification — consider the length of time since the conviction, the number of convictions, the nature of the conviction and the facts surrounding it, the age of the applicant at time of conviction, and evidence of rehabilitation.

Illinois law already contains some protections for individuals with conviction records seeking employment, specifically in the Job Opportunities for Qualified Applicants Act, which states an employer “may not inquire about or into, consider, or require disclosure of the criminal record or criminal history of an applicant until the applicant has been determined qualified for the position and notified that the applicant has been selected for an interview” or “a conditional offer of employment is made.”

Senate Bill 1480 would add to those protections, requiring employers to issue a written statement providing reasoning to any candidate they preliminarily disqualify because of a criminal record, giving the candidate an opportunity to respond within five days before a final decision is made.

In the written statement, employers must notify the applicant of the conditions that led to the disqualification, provide a copy of the conviction history report, and explain that the employee has an opportunity to respond to the preliminary decision by challenging the accuracy of the conviction record or providing evidence of rehabilitation.

If the employer makes a final decision to disqualify the applicant due to a conviction record, it must then notify the applicant in writing that they have a right to file a complaint with the Department of Human Rights.

“This is a civil action. That means that we are triggering the Illinois civil justice system,” Durkin said in the House floor debate. “That means lawyers will be retained on both sides and cases will take years and years and years. Depositions will take place. So what you have here is a bill that is not properly drafted. And it is a clear conflict.”

Rep. Maurice West, D-Rockford, defended the bill, arguing it would ensure those who may have committed a crime long ago or those who have been rehabilitated are not facing obstacles to future employment.

“This bill is not trying to take away protections from our employers,” West said in the House floor debate. “It is trying to make it a fair shake and empower those who went through the penal system. … Please understand that this helps our state by putting more people to work.”

“You’re really going to be stuck between a rock and a hard place deciding, even if this person has qualifications that are below the level of the other candidates, because the liability alone forces you to go ahead and hire someone with a criminal background over someone who doesn’t, simply because you’re afraid of the unknown liability exposure,” Maisch said.

Maisch also had issues with the Equal Pay Act portion of the bill, and he said a consensus was not reached on this “expansive rewrite” affecting businesses with more than 100 employees.

This portion of the bill requires businesses of 100 or more to obtain an Equal Pay Certificate within three years of meeting employee count requirements, recertifying every two years afterward. The application to the Department of Labor costs $150 and must be accompanied by an “equal pay compliance statement.”

Businesses subject to the bill’s requirements would also be required to compile a list of employees over the previous calendar year broken down by “gender and the race and ethnicity categories” as reported in the business’s most recently filed Employer Information Report with the Equal Employment Opportunity Commission. That would include salary information.

A license may be revoked “when the business fails to make a good faith effort to comply” with requirements. The department must first try to work with a business before revoking the certificate.

The department also has the authority to audit a business, and the business has a right to an administrative review of a revoked license. The department can impose a civil penalty in an amount equal to 1 percent of the business’ gross profits if a business does not obtain a certificate.

The bill also ensures that employers required to file Employer Information Reports with the Equal Employment Opportunity Commission will also submit the employment data from that report to the Illinois Secretary of State’s Office, which will publish the data.