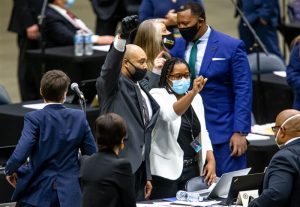 Rep. Justin Slaughter, D-Chicago, holds up his fist while wearing a black glove after the criminal justice reform bill passes the Illinois House during the lame-duck session of the Illinois House of Representatives held Jan. 13 at the Bank of Springfield Center. (Photo by Justin L. Fowler of The State Journal-Register)

Editor’s note: This story is part of an ongoing “Lame Duck Look Back” series in which Capitol News Illinois is following up on the major bills that passed both chambers of the General Assembly in the Jan. 8-13 lame duck session. This is the first of multiple stories examining the criminal justice reform backed by the Illinois Legislative Black Caucus

The 764-page bill was pushed by the Illinois Legislative Black Caucus as the culmination of nearly 30 hours of virtual hearings in state Senate committees, coordination with the offices of the governor and attorney general, and private negotiations with law enforcement groups and the Illinois court system.

Heading into the lame duck session, the Black Caucus had presented a comprehensive legislative agenda to combat systemic racism based on four pillars of policy, one of which was police accountability and criminal justice reform.

Many of the policy points that had their own subject matter hearings — including police certification, mandatory body cameras and cash bail — made their way into the final legislation. While some which were in the initial bill – such as ending qualified immunity and restricting police unions’ collective bargaining rights – were stripped from the final package in an amendment added to House Bill 3653 which passed shortly before 5 a.m. on Wednesday, Jan. 13.

Illinois was no exception. A summer of sometimes violent unrest led to hundreds of arrests and more than $20 million in property damage in Cook County alone. Grassroots pressure to address mounting distrust in law enforcement and a perceived lack of accountability was growing.

At a September news conference announcing the agenda, Black Caucus Chair Kimberly Lightford, a state senator from Maywood, acknowledged the national scrutiny and building momentum as a chance to address longstanding grievances and reforms sought by Black lawmakers and activists.

“This moment in time is presenting us with an unlimited opportunity to at long last address systemic racism and oppression that has plagued our communities for generations,” she said.

That same day, the Black Caucus held its first subject matter hearing, both for the agenda and for its criminal justice policy pillar. The topic was use-of-force laws and police transparency, and witnesses included representatives from the American Civil Liberties Union and the Illinois Association of Chiefs of Police who clashed in their testimonies.

This scene would be repeated more than four months later on the House floor, where many of the use-of-force provisions discussed in that hearing were included in the Black Caucus criminal justice bill. The ACLU and IACP would again disagree on use-of-force provisions as witnesses in a House Criminal Judiciary Committee hearing during the lame duck session.

Illinois Attorney General Kwame Raoul, who served several times as a witness in Senate subject matter hearings and for House debate during the lame duck session, workshopped the police certification provisions in the bill since June alongside IACP, the governor’s office and the Illinois Law Enforcement Training and Standards Board.

The elimination of cash bail, another provision in the bill, has been in the making legislatively since the formation of the Coalition To End Money Bond in 2016, which has been a longtime partner of the provision’s champion, Sen. Robert Peters, D-Chicago.

The language used in the provision was based on the 2020 Illinois Supreme Court Commission on Pretrial Practices. Representatives of the Illinois court system offered input on the implementation and writing of the cash bail provision as well.

State Sen. Elgie Sims, D-Chicago, filed an amendment to House Bill 163 to serve as the vehicle for the Black Caucus criminal justice legislation on Jan. 5, just three days before the start of the lame duck session.

The backlash from law enforcement and Republican lawmakers was swift. The Illinois Fraternal Order of Police called it “the worst thing to happen [to policing],” while their Chicago counterpart decried the bill as attempt to make being in law enforcement a crime.

Labor unions across the state collectively filed formal opposition to a collective bargaining provision, which was ultimately removed from the final bill. That included opposition from the powerful AFL/CIO, the nation’s largest federation of labor unions.

The AFL/CIO, as well as the Illinois Municipal League which represents towns, cities and villages throughout Illinois, also opposed the end of qualified immunity.

Some opponents also accused the original bill of defunding the police as well as the communities they serve, due to a provision that would cut state funds to areas where law enforcement agencies didn’t follow mandatory body cameras laws.

On the third day of the lame duck session, the Black Caucus held a news conference regarding their agenda. Sims, one of the criminal justice bill’s chief architects alongside Rep. Justin Slaughter, D-Chicago, noted their openness to compromise. Specifically, he cited the cash bail provision: While the bill’s original language would end the practice immediately, Sims said they were planning on pushing back the date two years at the behest of Illinois courts to make the transition to a new system easier.

Sen. Laura Ellman, D-Naperville, tweeted after the lame duck session about this period of negotiation. According to Ellman, she and other moderate Democrats opposed the more controversial provisions and withheld crucial votes that halted the advance of the legislation while these measures remained.

Sims later transitioned the omnibus to an amendment to a new bill, House Bill 3653, on the same day as the Black Caucus news conference on Jan. 10.

On Jan. 13, the last day of the lame duck session, the final version of the legislation was introduced well after midnight. Much of the bill’s language remained consistent with earlier drafts, but provisions affecting collective bargaining and ending qualified immunity for officers were removed in the final draft, muting the opposition from some of the key players, including the AFL/CIO.

Debate in the Senate began around 4 a.m. and voting concluded less than an hour later. Despite eight Democrats either voting against the bill or not voting at all, the omnibus was advanced to the House floor by a 32 to 23 vote. It received exactly the minimum 60 votes required to pass the House that same morning after less than an hour of debate.

The version that passed ends cash bail in Illinois by 2023, mandates body cameras and changes use of force laws. It does not change collective bargaining, strip officers of their qualified immunity or target the funding of departments that do not comply with body camera laws.

Republicans, meanwhile, pushed back on the late-night passage of the bill with limited floor debate. Sen. Paul Schimpf, R-Waterloo, was among those urging Gov. J.B. Pritzker to veto the measure.

“For our system of democracy to work, the people of Illinois must be able to trust that their legislature is operating by agreed upon rules with full transparency. Last week’s Lame Duck Session did not satisfy those requirements,” Schimpf wrote in the letter.

Pritzker, on Friday, Jan. 15, said he was “very pleased with that bill” when asked if he would sign it.

“Let me be clear that, as you know, I campaigned on a number of the items in that criminal justice reform bill, including cash bail, ending cash bail, making sure that we have police reform that’s incorporated into really every level of policing in the state of Illinois, and I’m very pleased with that bill,” he said. “So it’s something that has not come to my desk yet but you know where I stand on most of the issues in that bill.”

In the coming days, Capitol News Illinois will publish a series of reports explaining some of the language in the bill, when it takes effect and what changes it makes to existing state law.