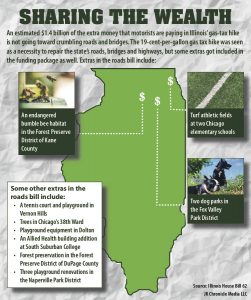 (First in a series looking at the pork-barrel extras included in the state gas-tax hike of 19 cents per gallon.)

No one is thrilled about paying more for gasoline, but we do it knowing that our pain will be all of our gain with better roads, safer bridges and improved public buildings.

However, our pain at the pump is also the gain for public and private entities that find themselves recipients of the windfall that the 19-cents-per-gallon state gas tax hike will generate. The hike is expected to mean $45 billion for roads and other infrastructure.

However, how “infrastructure” is interpreted is apparently open for debate. From new buildings at community colleges to a habitat for endangered bumble bees, plenty of extras are included in House Bill 62, which was touted as a way to reap money for crumbling infrastructure in Illinois.

The Illinois Policy Institute, an independent organization generating public policy solutions aimed at promoting personal freedom and prosperity in the state, has combed through the legislation and found a plethora of examples of how the gas-tax money is not going for roads, bridges or infrastructure improvements, as touted.

“There is a lot of pork and waste,” Adam Schuster, the institute’s budget and tax research director, said of the legislation. “We were pretty conservative in our estimates and we found $1.4 billion in pork, including dog parks, swimming pools and water parks.”

He said the way projects were selected for the legislation was not all about failing roads and bridges. Many of the projects were included to ensure the legislation passed both bodies of the General Assembly and for lawmakers, especially in Chicago and suburban districts, to look good in the eyes of their constituents, Schuster noted.

“It was done to earn the votes to pass and for their own elections,” Schuster said.

The Policy Institute representative noted the most clear-cut way the gas-tax package is packed with pork is that there is $580 million in member initiatives for lawmakers to dole out pretty much as they see fit.

“It is a slush fund,” Schuster said.

Schuster said the initiatives are not written into the bill and only learned about them himself through public comments on various websites.

“They are these extremely vague block grants,” Schuster said of the member initiatives.

He said lawmakers didn’t learn their lesson a decade ago — the last time a capital bill was approved.

“That was infamous for its waste and pork,” Schuster said.

He felt the 2019 capital bill could come to be viewed the same way.

Schuster said the Policy Institute had pushed the legislature for language that would have put some data and ranking to the initiative projects rather than simply giving lawmakers carte blanche.

The state of Virginia, he noted, has a system in place where data engineers calibrate proposed member initiatives, weighing the cost with the benefit. The list is publicly released, which wards against lawmakers’ pet projects earning selection.

“The way Illinois is doing it goes against best practices,” Schuster said. “It is not a good way to ensure taxpayers are getting a good return on their investment.”