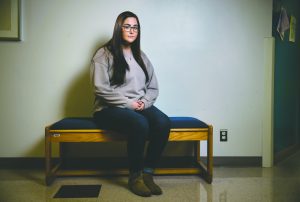 Jordan Bruder added political science classes to her curriculum at Lincoln Land Community College after learning more about the terrorist attacks of Sept. 11, 2001 in a class there. Bruder was an infant in 2001 and has no memory of that day. [Ted Schurter/The State Journal-Register]

Jordan Bruder is too young to remember the Sept. 11, 2001, terrorist attacks.

But she recalls growing up believing the blame for the 9/11 attacks was squarely put “on Muslim people,” an indictment some people in the towns she grew up in south central Illinois continue to harbor about the terrorist attacks on the World Trade Center in New York City and the Pentagon in Washington, D.C., that killed nearly 3,000 people.

“Everything was whitewashed for me,” said Bruder, a sophomore studying business and political science at Lincoln Land Community College in Springfield.

That re-orientation — “a self-discovery,” Bruder termed it — began with talking with her father, Eric Bruder, a middle-school history teacher, as well as doing her own research about 9/11.

“That’s made all the difference for me,” Bruder said. “Being a hateful person, that came from a place of ignorance. Now I feel I can go out into the world and be more tolerant.”

Bruder is part of a generation, now entering college, that has no direct memory of that day or weren’t even born yet. It’s giving professors new challenges and new audiences to teach about one of the most defining moments of the history of the United States. And to older people who have their “where-were-you” stories about 9/11, that gap can be jarring, if understandable.

College students may know about the events and the significance of them, said Christopher McDonald, a professor of political science at LLCC, but they aren’t able to experience the same visceral impact of those who watched the horror from 18 years ago.

McDonald, who teaches an “Early Start” program for high school seniors for LLCC, has seen this moment coming.

“There’s a distance for these students,” McDonald acknowledged. “They sense it’s really important, though.”

“I feel like these (students) are supposed to feel like (9/11) resonates, but it doesn’t,” said Kristen Chenoweth, the director of admissions at MacMurray College in Jacksonville, who also teaches a freshman seminar class. “They know it was something serious, but it’s not really tied to their lives in any tangible way.”

But Karen Contreras, a student at the University of Illinois at Springfield who is originally from Palatine, said even if today’s students don’t personally remember it or don’t have a personal story about it, “we understand how momentous it was and continues to be.

Generation grew up with 9/11 repercussions

It’s compelling for Paige Calvert to talk to older relatives and teachers who can describe exactly where they were and what they were doing when the events of Sept. 11, 2001, unfolded.

Calvert, a freshman from Pekin at the University of Illinois Urbana-Champaign, only knows about the terrorist attacks through conversations and what she learned in school. For a person born less than eight months before 9/11, Calvert said the events “seem like a faraway historical moment.” She was first introduced to the tragedy as a second-grade student.

“It feels so close to many people,” Calvert added. “It’s crazy that we’re the generation not even alive when this world-turning event happened and now we’re ready to go off into the world.”

Like Calvert, many students were introduced to the terrorist attack as elementary school students, though the introduction was usually to first responders and other heroes, not the graphic details of the day.

But this generation of students also grew up with the repercussions of 9/11. That means when they fly, they are getting to airports early and getting screened by the Transportation Security Administration. A slew of names and terms — Osama bin Laden, “no fly lists,” Guantanamo Bay and the War on Terror — connected with 9/11 are part of the students’ lexicon.

Emotion has also gripped them.

Faithe Metellus was born less than two weeks before 9/11. Earlier this year, she went to New York and saw where the World Trade Center once stood.

“I didn’t have a personal connection to it,” said Metellus, a freshman at UIS from Northbrook, “but seeing the names and photos (at the 9/11 Memorial & Museum), that hit me.”

Going to the site, said Metellus, a pre-nursing major, “made me imagine what it was like for the people there. I feel empathy for them. I know people were traumatized.”

Metellus said her mother recalled that on 9/11 her grandfather burst into the room, screaming, “We’re at war!” They turned on the television, just in time to see one of the towers collapsing.

“(My mother) had to lay down because she was in so much shock,” Metellus recalled being told.

Calvert remembered her mother, a third-grade teacher, telling her the only thing she could think about that day was getting home.

“They didn’t fully comprehend what was going to happen next,” Calvert said.

Carolyn Peck, a UIS professor of psychology, weaves the 9/11 events into her graduate-level Death and Dying class. For those students who have no memory of 9/11, she encourages them to get some sense of the event to understand its magnitude.

“That makes it more than a history lesson,” Peck said. “Seeing those interviews with survivors or relatives of those who died that day, it really forces students to pay attention.”

Like many people, Christopher McDonald flipped on the television to watch the coverage of 9/11. Now, he said, people go to their laptop or smartphone.

“I think (students) understand how the world changed after 9/11,” Chenoweth said, “just like I understand after the assassination of President (John F.) Kennedy how security changed around the president.

“We look at what changed — our understanding of the Bill of Rights, freedom of speech, freedom of information — since 9/11. I think they know that it has changed, but they don’t know what it was before, so it’s hard for them to feel it.”

Zygfriend Kurzymski, a freshman at UIS from Park Ridge who was born just before 9/11, said he, too, grew up hearing derogatory terms leveled at people as terrorists. But even that understanding has changed as he has grown.

“We learned (in a high school psychology class) that no matter how unbiased you say you are, you do judge people based on what you learn from society,” said Kurzymski, a biology and pre-med major. “As I grew up, especially with the school shootings, it redefines what we perceive a terrorist as.

“That can make people even more scared today because they don’t have a bias. These days (a terrorist) could be almost anybody.”

McDonald has seen that too: In his “Early Start” classes, he has asked students to describe a “terrorist.” There was a time that mainly versions akin to bin Laden popped to mind for his students. Last semester, McDonald said, students produced a description of a Caucasian school shooter, rather than a “Middle Eastern” figure.

“This was a huge shock to me,” McDonald admitted.

Today’s college students said even if they don’t have their own memories of 9/11, they have been affected by it.

“I do think about it,” Metellus said of the anniversary. “It’s important to remember all the lives taken.”

Bruder said one of the most important post-9/11 lessons she has absorbed is the need to continue to spread the truth about what happened.

“It’s important for us to keep the stories alive and fresh,” Bruder said. “History is bound to repeat itself, but I hope to God it doesn’t.”

Steven Spearie is a reporter for The State Journal-Register in Springfield. Reach him at 217-788-1524 or sspearie@sj-r.com