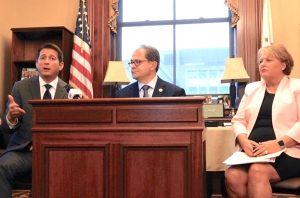 “What I want to say is, the gerrymandering train is on the tracks,” Senate Republican Leader Dan McConchie of Hawthorn Woods said during a news conference.  “It is moving ahead and Gov. Pritzker has considerable power as the chief executive to make his candidate promise a reality. If the governor abandons that promise, he abandons the best chance that we have to actually have changed the nature of our politics for not only the next 10 years, but for generations to come.”

Their comments came one day after Pritzker, speaking at a news conference, appeared to back away from his 2018 campaign pledge to veto any redistricting maps drawn by legislators, party leaders or their staffs.

But when asked by a reporter Tuesday, April 27 whether he still intends to honor that pledge, Pritzker appeared to backpedal.

“As I’ve said, I will veto an unfair map,” Pritzker said. “I’ve also said that in order for us to have an independent commission, we needed to have a constitutional amendment, something that would actually change the way the process operates today in the constitution. That did not happen.”

Both the U.S. and Illinois constitutions require state lawmakers to redraw congressional and legislative district maps every 10 years following the decennial census to account for population shifts and to ensure equal representation in Congress and the General Assembly.

The process is often highly political because the majority party has the ability to use demographic data and voting histories to draw maps that favor their candidates and work to the disadvantage of minority party candidates.

The idea of handing over that authority to an independent, nonpartisan commission has enjoyed bipartisan support in the past, and public opinion surveys have shown it also has broad popular support.

But legislative Democrats, who hold super majorities in both chambers of the General Assembly, have been moving ahead with the process this year in an effort to meet the state constitution’s June 30 deadline, after which they would lose their partisan advantage in the process.

Republicans have been pushing a bill this year, Senate Bill 1325, that would establish a 16-member bipartisan commission to redraw maps. But Democrats have argued that the bill is most likely unconstitutional because the current state constitution spells out a specific process for redistricting once the June 30 deadline is missed.

The process is even more complicated this year because of unprecedented delays with the census and its data.

On Monday, April 26, the Census Bureau released statewide population figures for all states and territories, showing Illinois with a total population of just over 12.8 million people, or about 18,000 fewer than it had in the 2010 census, a much smaller decline than many had expected.

But the detailed, block-level data showing exactly where all those people live — the kind of data needed to draw equal-size legislative districts — will not be available until mid-August at the earliest, several weeks past the June 30 deadline for Illinois redistricting.

In lieu of that detailed data, Democrats have suggested using alternative data sources such as population estimates compiled in the Census Bureau’s American Community Survey, which Republicans argue is both inaccurate and beyond the scope of that survey’s purpose.

“I think we saw (Monday) how important it is for the state to use the real data,” said Sen. Jason Barickman, R-Bloomington, the ranking Republican on the Senate Redistricting Committee. “There was lots of discussion about the estimates that were put out by the ACS data. And (Monday) was the census’ actual data. Those two were in direct conflict.”

Pritzker on April 27 declined to say whether he supports the use of data alternative to the census.

“Look, I don’t think the legislature has yet said what estimates or what numbers they’re going to take from. It could be one or more data sets that they might use,” Pritzker said before pivoting away from the question to talk about the 2020 census numbers generally.

Later on April 28, Sen. Omar Aquino, D-Chicago, chair of the Senate Redistricting Committee, and Sen. Elgie Sims, D-Chicago, vice chair of the committee, released a statement in response to the Republican news conference.

“Try as they might, Republicans can’t hide their true intentions: they want to cut the public out of the redistricting process entirely,” the statement read. “By calling on mapmaking to be put off until August or possibly September, they are advocating for control of this process to be turned over to a panel of political appointees who answer to powerbrokers, not the people of Illinois. That’s not reform, that’s failure.”