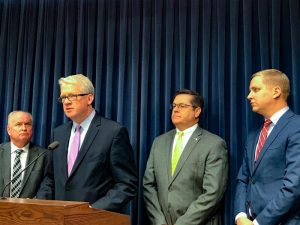 “These political entrenchments — these situations in which politicians pick their voters instead of voters picking their politicians — had a chilling impact on our ability to debate the important issues of the day here in Springfield,” he added.

One of those is redistricting reform, an issue the House Republican caucus is prioritizing this session and has supported for years. It will “stop” the culture that enabled unscrupulous behavior by some lawmakers over the past year and “devastated the state,” Minority Leader Jim Durkin, from Western Springs, said.

Villa Park Democratic Sen. Tom Cullerton was formally accused by a federal grand jury of collecting a salary as well as health and pension benefits from a labor union for work he did not do. He has pleaded not guilty.

Federal officials charged former Rep. Luis Arroyo, a Chicago Democrat, with bribery, charges that led him to relinquish his post.

And former Sen. Martin Sandoval, a Democrat from Chicago, pleaded guilty to federal bribery and tax evasion charges in a federal court in Chicago Jan. 28. He resigned effective Jan. 1.

Changing the method by which political maps are drawn “is probably the most important way we can clean up corruption and the culture that has created this horrible situation in Illinois,” Durkin said.

“The proposal for fair maps has been out there for years, and it’s one of the most thoroughly-discussed issues we’ve seen,” he said.

House Republicans are also pushing for legislation reforming lawmaker behavior. Rep. Grant Wehlri, from Naperville, said those “common sense measures” include prohibiting representatives and senators from being lobbyists while in office, preventing them from immediately becoming lobbyists after leaving their post and increasing the economic interest information legislators have to disclose.

“If the Democrats finally wanted to get serious on holding themselves accountable, and do what’s right for the people of Illinois, let’s move these pieces of legislation,” he said.

Durkin appeared to put the success of those changes, and others, on Democratic Gov. JB Pritzker.

“I think as leader of the party, he can get his members in line. That includes the [House] speaker [Chicago Democrat Michael Madigan] and also the president of the Senate [Oak Park Democrat Don Harmon] …,” he said.

His caucus is also planning to combat the “skyrocketing cost of property taxes” in Illinois, Rep. Dan Brady, R-Bloomington, said.