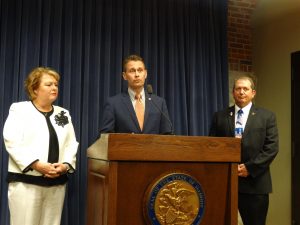 SPRINGFIELD — A group of Republican lawmakers said Feb. 18 they want to see internal reforms at the Department of Children and Family Services in addition to the increased funding that Democratic Gov. J.B. Pritzker is expected to propose.

During that speech, Pritzker called for a $147 million increase in funding for DCFS, the state’s primary child welfare agency, with much of that money going toward hiring more investigators to relieve the workload of caseworkers.

“I think most of us aren’t opposed to investing more money in these children,” Rep. Tom Weber, R-Lake Villa, said during a news conference at the Capitol.

He noted there are roughly 17,000 children in Illinois in the custody of DCFS and another 19,000 children and young adults are former foster children.

“I have a problem not seeing what the money is going toward,” he said.

Weber represents a district that includes Crystal Lake, a town where 5-year-old AJ Freund died last year after reportedly being abused by his parents. His body was found in a shallow grave in nearby Woodstock on April 24. His parents were later charged with murder.

He was one of 123 children in Illinois who died in 2019 within 12 months of having had contact with DCFS, according to a report by the agency’s inspector general. Of those, the report stated, 24 were determined to be homicides; 37 were the result of accidents; 34 were due to natural causes; seven were from suicides; and in 21 cases the cause of death was undetermined.

Weber said he believes law enforcement should have more independent authority to investigate reports of suspected child abuse and neglect. Under current law, he said, DCFS has sole jurisdiction except in cases in which the suspect is completely unrelated to the victim.

To address that, Weber said, he introduced House Bill 5281, which would require DCFS to immediately share any report it receives about suspected child abuse or neglect with the appropriate law enforcement agency. That agency, in turn, would have discretion about whether to pursue an independent investigation.

“If local law enforcement did have the ability to investigate any case of suspected abuse, in December of 2018 when AJ told an ER doctor that his bruises might have been caused by his mother, he may still be alive today,” Weber said.

In addition to Weber’s bill, Rep. Terri Bryant, R-Murphysboro, introduced a bill, House Bill 5417, that would require people who are “mandatory reporters” of child abuse and neglect — including doctors, teachers, clergy and other licensed professionals — receive training in how to file those reports.

“Apparently we passed a law that basically said you had to be trained, but then didn’t really do any training on how you make the report,” Bryant said.

Meanwhile, Rep. Joe Sosnowski, R-Rockford, has introduced a bill dealing with problems he says exist with child adoptions in Illinois.

House Bill 2335 would provide that a final order of adoption could not be overturned by a court for any reason other than fraud on the part of the adopting family. It would also require that if DCFS decides to withdraw or revoke its consent, it must do so within 60 days of the filing of the adoption petition.

Sosnowski introduced that bill during the 2019 session, but so far it has not received a hearing. He said it is a response to an incident reported to him by constituents who were in the process of adopting a child, but just as it was about to be finalized, he said, DCFS tried to halt the adoption, only to reverse course and allow the adoption to go through a few months later.