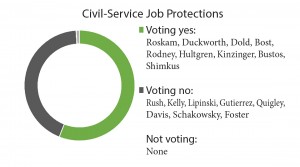 Civil-Service Job Protections: Voting 256 for and 170 against, the House on July 29 passed a bill (HR 1994) reducing certain civil-service protections to make it easier for supervisors to fire or demote poorly performing employees at the Department of Veterans Affairs. The bill denies those receiving notices the opportunity to appeal their dismissal to the full Merit Systems Protection Board, often a months-long process. Instead, targeted employees would appeal to an administrative law judge, with a decision required within 45 days. In addition, the bill extends the probationary period for new hires and eliminates a civil-service requirement that targeted employees receive 30 days’ notice of the action against them and seven days to submit a response.

Jeff Miller, R-Fla., said: “The status quo is not working. It is failing the mission of the Department of Veterans Affairs….The secretary needs the ability to make real reforms, and he needs to be able to do it quicker than the current average timeline of six to 12 months to remove a single employee.”

Mark Takano, D-Calif., said the bill is “an attempt to destroy the Civil Service using the VA as a test case…. We should not, under the guise of `accountability,’ destroy one of the best tools we have to provide the benefits and services we have promised our veterans. That tool is a nonpartisan and nonpolitical VA workforce.” 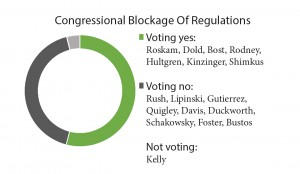 Congressional Blockage Of Regulations: Voting 243 for and 165 against, the House on July 28 passed a GOP-drafted bill (HR 427) that would allow major rules issued by the executive branch to take effect only if they receive – in advance — votes of approval from both chambers of Congress. This would reverse present law, under which Congress can disapprove of (kill) new regulations only after they are in place. The bill covers rules having at least a $100 million impact on the economy. Under the separation of powers doctrine, Congress is entrusted to write laws and the executive branch to implement them, usually through a rulemaking process that invites comments from stakeholders and the general public. Critics say that in writing several dozen rules each year to put new laws into effect, the executive branch often usurps legislative powers, making bills like this one necessary.

Steve Scalise, R-La., said: “If a rule is being proposed by…an unelected bureaucrat that is so important that it is going to have a major impact on our economy, shouldn’t it at least go through the transparency of coming before the elected representatives of the people?”

Hank Johnson, D-Ga., said: “Who stands to gain from Republican obstructionism? Corporate giants that are holding our country hostage through a deregulatory agenda and political influence that would rival the industrial monopolies from the past century.” 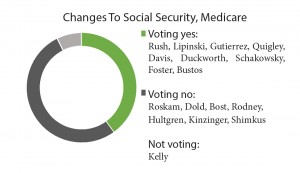 Changes To Social Security, Medicare: Voting 167 for and 241 against, the House on July 28 defeated a motion by Democrats to prevent regulatory actions under HR 427 (above) that would restructure Medicare or Social Security. The motion stated opposition to changes such as converting Medicare to a voucher program or raising the Social Security retirement age.

Bob Goodlatte, R-Va., said: “Reject this motion…and show America that Congress can act for the good of American job creators and Americans who desperately want and need jobs.”

A yes vote was to protect Medicare and Social Security as now structured. 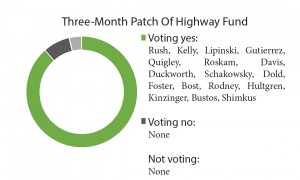 Three-Month Patch Of Highway Fund: Voting 385 for and 34 against, the House on July 29 passed a bill (HR 3236) that would authorize funding for road, bridge, tunnel and mass-transit construction projects through Oct. 29 while adding $8 billion to the Highway Trust Fund to keep it solvent through December 18. The bill would pay for itself by making accounting changes in several federal programs.

Paul Ryan, R-Wis., said the bill “gives us the time we need to try and put together a long-term highway solution.”

Jim McDermott, D-Wash., said: “People said in the last election what we need to do is elect Republicans,” and “what they got is a Senate and House that can’t come up with a highway bill.” 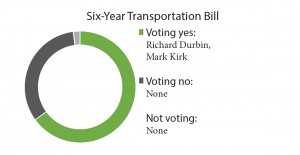 Six-Year Transportation Bill: Voting 65 for and 34 against, the Senate on July 30 passed a bill (HR 22) that would authorize $350 billion over six years for highway and mass-transit construction, auto and road safety and other transportation programs. The first three years would be financed by Highway Trust Fund receipts, the sale of Strategic Petroleum Reserve oil and miscellaneous revenue measures, with the final three years not yet paid for. House GOP leaders declined to take up the bill because it reauthorizes the Export-Import Bank, among other objections. The Senate then passed a three-month transportation bill (below).

Barbara Boxer, D-Calif., said: “Clearly, no one here is going to be personally held liable if a bridge collapses, but morally we need to understand that…we have 60,000-plus bridges in bad condition and that 50 percent of our roads are not up to par, we have an obligation to fix it.”

Richard Blumenthal, D-Conn., objected the bill’s “failure to provide a reliable funding source for the commuter rail systems millions of Americans depend on every day and its failure to address our country’s ongoing crisis in transportation safety.”

A yes vote backed a long-term transportation bill and a reauthorization of the Export-Import Bank. 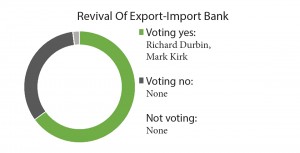 Revival Of Export-Import Bank: Voting 64 for and 29 against, the Senate on July 27 advanced an amendment to HR 22 (above) that would renew the Export-Import Bank’s congressional charter, which expired on June 30. Supporters defend the bank as a job-creator that returned $675 million to the Treasury last year, while critics see it as corporate welfare for firms such as Boeing, Caterpillar and General Electric.

The bank provides direct loans and loan-guarantees to foreign purchasers of U.S. products in politically or economically risky markets abroad. By law, it cannot compete with commercial lenders. Fewer than 2 percent of the bank’s transactions have defaulted in recent years, and it usually returns a profit to the Treasury even with an exposure of $100 billion-plus in taxpayer liability.

Rob Portman, R-Ohio, said: “There are 100 transactions sitting in the pipeline worth more than $9 billion, and those transactions won’t go forward unless we take action.”

Ted Cruz, R-Texas, said the bank exposes U.S. taxpayers to “hundreds of billions of dollars in loan guarantees given out to a handful of giant corporations. It is a classic example of cronyism and corporate welfare.”

A yes vote was to keep the Export-Import Bank in business. 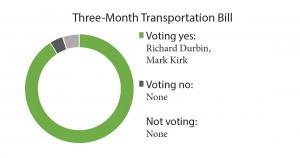 Three-Month Transportation Bill: Voting 91 for and four against, the Senate on July 30 joined the House (above) in passing a bill (HR 3236) to fund surface-transportation construction projects in the U.S. through Oct. 29. The bill gives Congress more time to seek agreement on long-term funding sources for transportation projects in addition to the federal gasoline and diesel taxes that supply the Highway Trust Fund.

A yes vote was to send President Obama a short-term funding bill for road, bridge, tunnel and mass-transit construction.

— How They Voted: Illinois Representatives’ Votes in Congress —