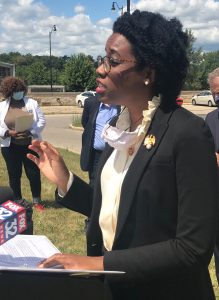 The nation’s top postal executive plans to suspend a series of changes that critics say have slowed mail delivery and could affect timely delivery and return of mail-in election ballots this November.

“I am horrified by this administration’s efforts to dismantle this essential service,” said Rep. Lauren Underwood (D-14) who appeared with two colleagues at an Aug. 18 press conference called to draw attention to postal service worries. “I demand a reversal of the recent (Postal Service) operational changes that put all of us and our very democracy at risk.

“We must ensure that USPS has the resources necessary to serve our communities during COVID-19 and beyond,” she continued.

Underwood was joined at the press conference outside the downtown Aurora main post office by Rep. Bill Foster (D-11) and Rep. Sean Casten (D-6) as well as workers and postal union officials.

The trio addressed the media as DeJoy announced in Washington D.C. that he’ll suspend operational changes until after the November general election.

But DeJoy’s Aug. 18 announcement did not indicate there would be a reversal of the dismantling automated sorting equipment at some post offices, removal of mail boxes around the country, reshuffling top executives and changes in work rules and overtime.

“I came to the Postal Service to make changes to secure the success of this organization and its long-term sustainability,” DeJoy said in a statement. “I believe significant reforms are essential to that objective, and work toward those reforms will commence after the election.”

Critics charge that his actions have resulted in mail delivery delays. DeJoy, who assumed his position on June 15, previously served as a political fundraiser for President Donald Trump and the Republican Party.

All three Democratic legislators said mail delays brought on by policy and other changes were inexcusable.

“The Postal Service is a pillar of our democracy,” Foster said. “(It’s) enshrined in the Constitution for a reason and essential for providing critical services like delivering prescriptions, Social Security benefits, paychecks, tax returns and absentee ballots sent to millions of Americans. 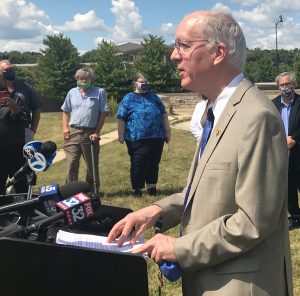 Rep. Bill Foster (D-11) called the U.S. Postal Service “a pillar of our democracy” during a press conference in front of the Aurora Post Office. (Photo by Jack McCarthy / Chronicle Media)

“It’s disgraceful that President Trump and his political appointees have deliberately tried to weaken and delay the United States Post office in the run up to the national election,” Foster said. “We will not stand by as the try to manipulate the Postal Service to suppress votes and to try to scare people out of their right to participate.”

Casten said his office has been inundated with calls from concerned businesses worried about deliveries and constituents worried about receiving medicine and federal funds.”

“I don’t want that, nobody here wants that, my constituents don’t want that, the American people don’t want that,” Casten said. “We are having this conversation today because the President felt like he did not trust democracy would give him a win in the election. Keep the pressure on and make it clear that we will not tamper with the U.S. Mail.”

Republican Congressman Darin LaHood, whose district includes a large portion of central Illinois including Peoria, Tazewell and Woodford counties, said in a statement released Aug. 18, the USPS “provides critical services to constituents in Illinois’ 18th Congressional District, particularly in our rural communities and for veterans and senior citizens who need critical medications. I continue to support mail carriers and the essential work they do, including the need for six-day door delivery. “

He said he was pleased that the Postmaster General decided to delay operational changes until after the election “to avoid any confusion or the appearance of an impact on election mail that has increased because of COVID-19.”

Mail-in election balloting has gained prominence in the wake of the ongoing COVID-19 pandemic and the desire by many individuals to remain safely at home.

The Postal Service recently told 46 states and the District of Columbia that is cannot guarantee all mail-in ballots would arrive at election authorities in time to be counted. 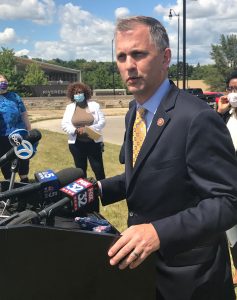 Illinois Attorney General Kwame Raoul and 13 other attorneys general filed a federal suit on Aug. 18, claiming that by terminating workers’ overtime, eliminating a number of mail sorting machines, removing several mailboxes and rescheduling the delivery of some late-day mail, DeJoy is subverting the national election this year.

“Voting by mail must be a reliable option that allows Americans to safely exercise their right to vote this fall during the ongoing pandemic,” a spokesperson for Raoul said in an email. “Americans should not have to risk their lives to participate in our democracy.”

U.S. House Speaker Nancy Pelosi has called the House back from an August break to consider legislation that would block any attempts to change the Postal Service. A vote is expected on Saturday.

Earlier, the House approved $25 billion plus an additional $3.6 billion in security funding to help the Postal Service handle extra mail-in ballot workload as part of a $3.4 trillion HEROES stimulus package.

The Senate has yet to take up the bill and went on an August recess without action.

“The way it’s supposed to work is that we pass the HEROES Act and if they don’t like all of it they should modify it and send it back to us,” Foster said. “We modify it back. It’s called ping-ponging and it’s well-established. The problem is you can’t play ping-pong if the guy just doesn’t return the ball … They should have returned it to us 2 1/2 months ago.”

If the Senate refuses to address the matter, Foster said, “The real answer to that is the ballot box. That’s why protecting it is so important.”