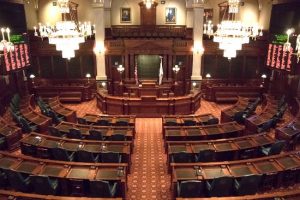 The House of Representatives chamber inside the Springfield Capitol Building. (tripadvisor.com)

SPRINGFIELD – The Illinois House advanced several bills Thursday, April 22 including one which would implement term limits on leadership positions in the General Assembly and another that would create additional protections for tenants’ sources of income.

House Bill 642, introduced by Rep. Anthony DeLuca, D-Chicago Heights, would bar any individual from serving more than 10 consecutive years in a leadership position in the General Assembly, including speaker of the House, president of the Senate, and minority leadership positions in each house.

The bill would take effect for any legislators seated on or after Jan. 12, 2022.

“This is a big moment for reform in the state of Illinois,” DeLuca said on the house floor April 22.

While the Illinois House and Senate both passed term limits on party leadership in their respective chamber rules in January, the new bill would enforce the term limits through state statute.

The rule changes come on the heels of former Speaker Michael Madigan being ousted following his record 36 years as speaker between 1983 and the election of Speaker Emanuel “Chris” Welch in January.

On the house floor, DeLuca credited Welch for pushing for the new term limits.

“All of us here know how things work in Springfield, we included term limits in our rules, that in itself was very historic,” DeLuca said. “This takes it to an entirely new level, and it would not have happened without the support of Speaker Welch.”

House Bill 642 passed with no votes against in the House and will be sent to the Senate.