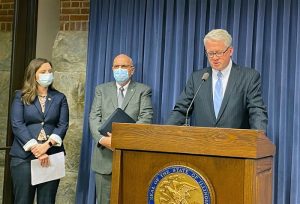 Reimagine Illinois, unveiled by the House Republican Caucus at a news conference, asks voters to “imagine an Illinois free of corruption and with responsible fiscal leadership.”

A website outlining the initiative was also launched containing multiple podcasts and videos from GOP lawmakers discussing their priorities for the session and goals they have for reforming the state’s government and finances.

Rep. Mike Murphy, R-Springfield, chairs the initiative. At the March 17 news conference, Murphy said he was asked by Minority Leader Jim Durkin of Western Springs several months ago to lead the group and “present a comprehensive framework of proposals that we believe resonates throughout the entire state.”

“I expressed some concerns about us being the party of ‘no’ a lot of times,” Murphy said in a podcast uploaded to the Reimagine website, reimagineillinois.com. “We need to do a better job of messaging rather than just saying what’s being proposed is bad.”

The campaign is based on four policy pillars: public safety, anti-corruption, economic opportunity and fiscal responsibility.

The anti-corruption platform, headed by Rep. Blaine Wilhour of Beecher City, aims to enact a lobbying ban for members of the General Assembly and make it easier for Illinois residents to add amendments to the state constitution via referendum.

Durkin said he’s open to working with Democrats on anti-corruption and transparency measures, a notion that House Speaker Emanuel “Chris” Welch has reciprocated in a departure from his predecessor, former Speaker Michael Madigan.

Madigan and his legacy were mentioned several times by Republicans on the Reimagine website and at their news conference as the reason many of the proposals are necessary.

The public safety platform focuses on two major developments Republicans seek to address. Those developments include the long delays in FOID and Concealed Carry License applications being processed for Illinois residents wishing to legally own firearms, and the massive criminal justice reform omnibus package signed into law last month by the governor amid heavy opposition from Republicans and law enforcement groups.

“It was a mistake,” Durkin said of the legislation that will eventually end the use of cash bail in Illinois, mandate body cameras for all officers, and create new, stricter use of force guidelines for officers. “It was a mistake a month ago and it’s a mistake today.”

The bill’s sponsors have acknowledged the need for follow-up legislation, or “trailer bills,” to fix some issues in the legislation raised by law enforcement. Durkin said as a former prosecutor, he is open to “negotiate the bill on behalf of law enforcement,” as long as the changes proposed are meaningful.