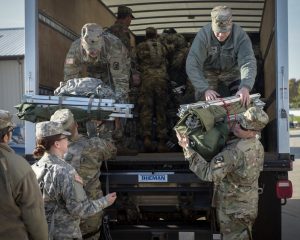 Members of the Illinois National Guard are part of the effort trying to help Puerto Rico residents get back on their feet after the devastation of Hurricane Maria.

Guard members are in their fourth week of assisting with distribution of water and other supplies in hard-hit areas of the country.

“We have been doing a lot of places of distribution, loading up water and taking it to people in the area,” 1st Lt. Erin Speck of the 933rd Military Police Company said from Puerto Rico. “Our soldiers also go out and deliver water to houses, going to each house. What we do varies from location to location.”

The 154 members of the 933rd, based out of Fort Sheridan, have been in Puerto Rico since Nov. 4. If all goes according to plan, the unit should return in early December.

“People are still appreciative,” Speck said of residents’ reaction to assistance. “They know we are here to help the residents.”

Speck, who grew up in La Grange, but now lives in Texas, said her unit responded enthusiastically when given the task of going to Puerto Rico to help with aid efforts.

Relief efforts, Speck said, have been hampered at times by mudslides in Utuado and other mountain areas.

“It has rained every day since we’ve been here,” the 1st lieutenant said. “There has been a lot of (land) movement.”

She noted that along with engineers, helping to rebuild villages, the 933rd also includes paramedics who have treated people in the wake of the mudslides and landslides.

Speck said Guard members are on rotations because of the warm weather and high humidity in Puerto Rico right now. She said temperatures are in the mid- to high 80s most days, with high humidity.

“It’s draining because of the heat,” she said of soldiers’ work. “They are walking, delivering supplies to houses. We do have to give them rest.”

Speck will mark seven years in the National Guard at the end of December.

Asked what drew her to that branch of military service, Speck responded, “I really can’t put my finger on it. It was something I was just drawn to.”

Speck said she has really enjoyed her time in the Guard, pointing to strong bonds that she has created with many individuals over the years.

Puerto Rico is her first aid mission with the Guard.

“I really enjoy seeing the soldiers involved and how much help they are able to give,” Speck said.