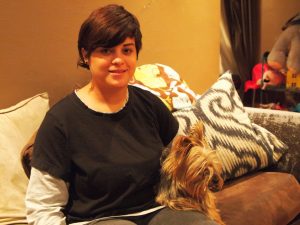 Andrea Alvarado of Puerto Rico, a survivor of Hurricane Maria, sits on a couch inside her sister’s Berwyn home with the longtime family dog, Diego. Alvarado said she is more disappointed in the Puerto Rican government for not being ready for Hurricane Maria when it hit. (Kevin Beese/Chronicle Media)

After Hurricane Maria, Andrea Alvarado and her boyfriend found themselves financially destitute.

Neither of her employers, Sally Beauty Supply and Supercuts, planned to reopen anytime soon. The tattoo parlor where her boyfriend worked also stayed shut down. ATMs didn’t work. Banks were closed.

In order to get cash for necessities for their family — which includes their 2-year-old son — Alvarado, who normally got $20 for a haircut at Supercuts, was cutting hair in the garage of their home for $4 so they could have some cash. Her boyfriend, who would normally get $900 for a sleeve tattoo taking six hours of work, was doing that same inking of a car battery for $80 to get gas money and cash to buy groceries at barren supermarkets.

“Everything that we had in our accounts we couldn’t use because there was no way to get any money out,” said Alvarado, who is now living with her sister in Berwyn. “No ATMs, no nothing … The groceries we had obviously did not last us long.”

After talking with her sister and her mother, Alvarado decided to move to the Chicago area with her son and boyfriend to be with family.

The first flight out they could find was a month after Hurricane Maria’s Sept. 20 path of destruction. Alvarado said that month between the hurricane and flight to Chicago was extremely taxing.

The hurricane tore the roof off the couple’s home and led to flooding in the residence. Their home was broken into because it was not secured. She said thieves took whatever they could carry.

The tropical storm itself was a harrowing experience, according to the Berwyn resident.

“I was trying to keep calm because of my son, but when he fell asleep I just started crying because I knew we were going to lose everything,” Alvarado said.

Six-hour lines for gasoline after the hurricane were not uncommon, she noted.

Having to drive 90 minutes to the north to get phone service, Alvarado said the feeling she got from talking with family members was that help was on the way from the U.S. government.

“I called my mom and she was like there were supposedly people helping out with FEMA and that there were soldiers coming to the island,” Alvarado said. “I am like ‘I don’t see anything.’ I was already desperate. I didn’t see any help. There was nothing. I didn’t see the help that they said that they were going to give.”

She said her boyfriend was recruited to work for the Federal Emergency Management Agency, an offer he jumped at in order to make money for his family. He soon learned, however, that he would not be paid, that it was a volunteer position for which he was being sought.

Alvarado said it took a while but that President Donald Trump and the U.S. government did eventually send money to help the country.

She said she is more disappointed in the Puerto Rican government for not being ready for Hurricane Maria when it hit. Alvarado noted that Hurricane Irma was forecast to hit the island and when that storm bypassed the island, the country had even more time to get ready for Maria.

She hoped the hurricane would serve as a wake-up call for Puerto Rican residents to put people in charge who will act in the best interest of residents.

“The people of Puerto Rico don’t know how to manage themselves,” Alvarado said. “They did not know that the people in charge have been doing nothing to help the people. They have not elected people who represent themselves. The Puerto Rican government most definitely should have reacted sooner.”

Even though it would mean demolishing her residence and starting over, Alvarado, who grew up in Wheaton, plans to someday return to Puerto Rico, her home for the past nine years.

“It is my home, my culture,” she said of Puerto Rico.