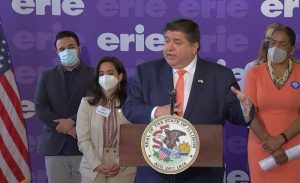 Gov. J.B. Pritzker discusses the return of Title X family planning funding in Illinois during a news conference Monday, May 16 in Chicago. (Illinois.gov)

SPRINGFIELD – Illinois has resumed participation in the federal Title X family planning program after refusing to take part for the past three years in protest over a Trump administration policy regarding abortion services.

Gov. J.B. Pritzker announced this week that the state has been awarded $5.4 million in federal funding for the upcoming fiscal year and will soon distribute $11.2 million in grants to agencies that operate 98 family planning clinics throughout the state.

At issue has been the Trump-era policy, recently reversed by the Biden administration, that prohibited recipients of those grant funds from counseling patients about abortion options or referring them to abortion providers.

“Now that the Biden administration has reversed Trump’s gag rule, I’m proud to announce that we have rejoined the federal title 10 program and we’re putting record funding toward our Illinois family planning program,” Pritzker said at a Monday news conference.

Prior to the Trump administration’s rule, which took effect in 2019, the Illinois Department of Public Health received about $4 million a year through the program.

Pritzker announced in August 2019, shortly after the policy took effect, that IDPH would no longer participate in the program while a number of other family planning service providers, including Planned Parenthood of Illinois and Aunt Martha’s Health and Wellness, said they would not comply with the new requirements.

For the rest of that fiscal year, IDPH used General Revenue Fund money to fill in what was previously paid for by the federal government. The following year, the agency expanded the program with $5.8 million to fund Planned Parenthood, which had previously gotten its Title X money on its own, and other providers that weren’t previously part of the state’s Title X program.

For the upcoming fiscal year, which begins July 1, Illinois reapplied for the federal money and was awarded $5.4 million while the state continues to fund the program with $5.8 million in state funds, bringing the total to $11.2 million.

Speaking Monday at the Erie West Town Health Center in Chicago, one of the clinics that will receive funding, Pritzker said family planning clinics provide critical services like pregnancy tests, cancer screenings and tests for sexually transmitted diseases and that most of the patients they serve live below the federal poverty level.

“So when President Trump, former President Trump, initiated a gag rule, banning federal funding for centers like this one who dare even mention abortion as an option for someone who never planned being pregnant, I told the federal government that in the absence of their support, the state will fund these clinics,” he said.

Pritzker also said that even though the Biden administration has lifted the so-called gag rule, he also believes women’s access to reproductive health care and many other rights are in danger due to a soon-to-be released U.S. Supreme Court decision that could overturn the landmark 1973 decision Roe vs. Wade, which legalized abortion nationwide.

“The slippery slope that will eradicate reproductive choice has already begun,” he said. “First, it’s restricting abortion. Then it will control access to contraceptives.”

That was a reference to a 1965 Supreme Court case, Griswold v. Connecticut, in which the court struck down a state law that made it a crime for any person to use a drug or instrument to prevent conception. Then-Justice William O. Douglas wrote in that opinion that the Bill of Rights, when read as a whole, creates “penumbras,” or zones of other rights, including a right to privacy.

Others, however, have argued that reversing Roe v. Wade would only allow states to decide their own policies on abortion.

In 2019, anticipating the possibility that Roe v. Wade might one day be overturned, Illinois lawmakers passed the Reproductive Health Act which, among other things, declares access to reproductive health care, including abortion services, a fundamental right under Illinois law.

Pritzker urges Congress to ‘be like Illinois’ in protecting abortion services