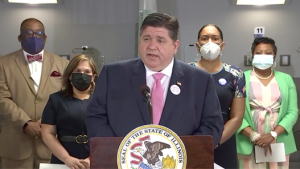 Gov. J.B. Pritzker speaks at a Fairview Heights abortion clinic, calling on Congress to “be like Illinois” in protecting abortion rights. (Illinois.gov)

SPRINGFIELD – Gov. J.B. Pritzker called on Congress Wednesday, May 11 to “be like Illinois” and codify abortion access into federal law.

Pritzker made those comments at a Fairview Heights abortion clinic, touting steps Illinois has taken to protect abortion services should a U.S. Supreme Court decision overturning the 1973 Roe v. Wade decision be finalized as precedent.

“It’s long past time for this nation to codify Roe into federal law,” Pritzker said. “Basic rights of women to control their own bodies are about to be stripped away.”

The Women’s Health Protection Act that was before Congress May 11 would have protected an individual’s ability to determine whether to continue or end a pregnancy and prevent states from acting to remove or alter abortion protections in the future.

But the legislation did not pass the Senate this afternoon, falling by a vote of 49-51 after Democratic West Virginia Sen. Joe Manchin joined Republicans and voted no. Democrats do not have the 60 votes necessary to overcome a Republican filibuster.

Advocates at a news conference at the Fairview Heights Regional Logistics Center warned that overturning Roe would create further inequities in health care among low-income and minority women that already have difficulties receiving quality care.

Opened in January, the RLC is operated by Planned Parenthood and the Granite City-based Hope Clinic for Women, making abortion care more accessible.

Natalee Clemons, a call center associate at Planned Parenthood, said she was once a patient seeking an abortion in Missouri and had to jump through “medically unnecessary hoops” to get care. 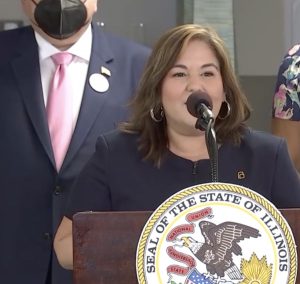 Yamelsie Rodriguez, president and CEO of the Reproductive Health Services of Planned Parenthood of the St. Louis Region, speaks at news conference May 11 at the Fairview Heights Regional Logistics Center. (Illinois.gov)

Clemons said she was 19 years old, about to attend college and newly single when she learned that she was pregnant despite being on birth control. Due to personal and medical reasons, parenthood was not an option, she said. Missouri’s strict abortion laws, Clemons said, made it difficult to end her pregnancy in a quick and convenient manner.

She said she had to make two trips to the clinic and listen to “state-mandated propaganda” from her doctor, and she faced financial burdens because of bans on insurance funding of the procedure.

“We all deserve the abortion experience Illinois has offered to patients,” Clemons said. “The kind that centers medicine and people.”

Rep. LaToya Greenwood, D-East St. Louis, said the past two years have amplified the gender, racial and economic inequities that have long blocked access to quality health care for low-income and minority people.

Greenwood said the potential decision to overturn Roe v. Wade will be a “matter of life and death” for Black and brown women.

“We should be ensuring that no one is being forced to be a mother against their will,” Greenwood said.

Since the leaked draft opinion in a case challenging Roe v. Wade, Illinois Democrats have warned that the overturning of that precedent threatens the right to other reproductive health measures such as birth control and is an “end to the constitutional right to privacy.”

Pritzker said other precedents set by the Supreme Court, such as marriage equality, are also threatened and that Congress is going to need to protect and codify a lot more rights in response to the “radical right-wing Supreme Court.”

Illinois Democrats have also highlighted laws aimed at protecting and expanding abortion access for Illinois residents and people from out of state.

Yamelsie Rodriguez, president and CEO of Planned Parenthood of the St. Louis Region and Southwest Missouri, said that Illinois is on a “new frontier of abortion access” and she is thankful lawmakers have taken the steps to codify women’s reproductive rights into law. 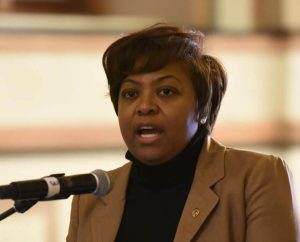 “We are a safe place not just for Illinoisians but for anyone who needs abortion in a post-Roe world,” Rodriguez said.

Pritzker said that since 2015, the number of out-of-state patients seeking an abortion has tripled and he expects it to soar if Roe is overturned.

In response to proposed laws in other states that aim to criminalize people who travel out of state for an abortion and those who aid them, Pritzker said he is working with the attorney general’s office and his own general counsel about legislation that would protect Illinois abortion providers from being sued or held criminally liable.

Rodriguez highlighted that since the opening of the RLC, case managers have helped nearly 1,000 patients from seven states travel to Illinois for an abortion. She said case-managers help out-of-state patients with traveling, lodging and other financial assistance.

Illinois has tangled history with abortion despite recent liberal push