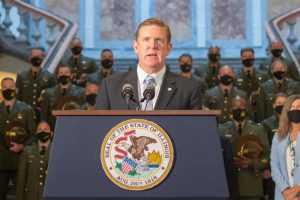 But Kelly also said easy access to firearms plays a role in expressway shootings, and many of the weapons used in criminal activity have previously been stolen.

Over the past two years, Kelly said the agency has gone through criminal records to identify people who should not have firearms and revoked about 17,000 Firearm Owners Identification cards and prevented about 25,000 attempts of people illegally obtaining a firearm in 2021.

Kelly suggested lawmakers update the state’s stolen firearm statute to reflect a recently-passed “Fix the FOID Act” that requires ISP to create a public database to provide information on guns that have been reported stolen.

Kelly said that with anyone being able to access the stolen gun database, there should be no ability for an individual to claim that they did not know a firearm was stolen.

Signed into law in August 2021, House Bill 0562 made changes to FOID Act, requiring ISP to remove guns from people with revoked FOID cards and calling on the agency to continuously monitor state and federal databases for prohibited gun buyers.

Kelly said the agency is working with local groups to aid crime victims and help reduce violence. He said that in East St. Louis, they have been implementing the Public Safety Enforcement Group that is an investigative unit that takes a community-based, trauma-informed approach aimed at reducing violent crimes.

The group works with organizations throughout the community that help victims in dealing with trauma.

Kelly also addressed issues regarding staffing and the mental wellness and safety of officers.

The agency has 1,836 sworn officers but Kelly said they have a “retirement bubble” causing challenges with staffing due with a large number of troopers hired in the late ‘90’s getting closer to retirement. He said the agency is trying to get back over 2,000 officers.

​The governor’s proposed budget for the upcoming fiscal year includes $18.6 million in general funds to support three ISP cadet classes to hire and train 300 officers.  Kelly said it would be the largest cadet class in ISP history and will help the agency address staffing needs.

Regarding the public safety of officers, Kelly said protections need to be strengthened for officers when it comes to violence and other injuries.

He also said he wanted to see improvements regarding the mental well-being and health insurance of officers. He said that the health insurance troopers have is good but it creates cost barriers to receiving proper mental health help.