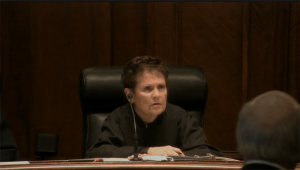 Justice Rita Garman, a downstate Republican from the 4th District, is pictured in a video feed of the state Supreme Court’s March docket. She announced Monday, May 9 she would retire on July 7. (Blueroomstream.com)

SPRINGFIELD – Republican Illinois Supreme Court Justice Rita Garman announced Monday, May 9 that she will retire on July 7, marking the end of a long legal career that has included 48 years as a jurist.

She would have been up for retention this year, but the timing of her retirement means the other six justices will appoint someone to serve in her 4th District seat until the 2024 elections. She has served on the high court since 2001.

“There is no doubt that I have had the role of a lifetime, a privilege to serve the people of the state of Illinois as a member of the court system at every level,” Garman said in a statement released by the court. “But this is the right time for me to step back from my public role and allow someone else to assume this all-important position.”

“I was turned down for a number of open positions, once being told ‘I don’t know what I would do with you because no one wants to talk to a woman lawyer,’” Garman said. “Today, I am proud that these opinions are a relic of the past. I am also pleased that 40 percent of Illinois lawyers are now women and the number of women in many law classrooms outnumber men.”

Garman said the highlight of her career came on Christmas Eve in 1974 when she and her husband Gill were driving with their 2-year-old daughter to Joliet. Listening to the news on the radio, she heard that the first woman had been named judge in downstate Illinois.

“This was the moment when I learned I had been appointed as associate judge — the first woman judge in my circuit,” she said. “It was a newsworthy event 48 years ago, and a life-changing event for all of us.

Before her appointment, Garman had been an assistant state’s attorney in Vermilion County from 1969 to 1973 and worked briefly in private practice. She served as associate circuit judge for 12 years, as circuit judge in the 5th Judicial Circuit from 1986 to 1995 and presiding circuit judge from 1987 to 1995.