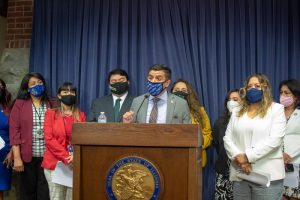 Led by Rep. Aaron Ortiz, D-Chicago, members of the Illinois Legislative Latino Caucus speak at a news conference May 27 at the Illinois State Capitol to unveil their legislative agenda for the remainder of the session. (Capitol News Illinois file photo by Jerry Nowicki)

The Illinois Way Forward Act, or Senate Bill 667, requires that the existing agreements between local jails in McHenry, Pulaski and Kankakee counties and Immigration and Customs Enforcement must end by Jan. 1, 2022. The bill also prohibits any future agreements between ICE and local governments to “house or detain individuals for federal civil immigration violations.”

The bill would also strengthen the TRUST Act, or “Transparency and Responsibility Using State Tools,” which took effect in 2017.

The TRUST Act prohibits state and local law enforcement officials from detaining “any individual solely on the basis of any immigration detainer or nonjudicial immigration warrant.”

Under the TRUST Act, state and local police cannot arrest or detain individuals based on suspected or actual immigration status. It also prohibits police from holding or detaining people based on ICE arrest warrants or detainers.

But there are other types of cooperation that local police can engage in with federal immigration enforcement, such as cooperating in joint operations with ICE, said Fred Tsao, who is senior policy counsel at the Illinois Coalition for Immigrant and Refugee Rights, which lobbied for this bill.

Local police can still participate in and cooperate with ICE if the case involves a criminal offense, Tsao said.

“But if it’s purely a civil immigration situation, then local police cannot touch that,” he said.

SB 667 would also empower the state attorney general’s office to investigate violations of the TRUST Act and enforce compliance through local courts.

Under the current law, the mechanism to enforce the TRUST Act is to have an injured party bring the lawsuits themselves in county court.

“That can be really difficult and really expensive and time consuming. And it places the burden on the person who was hurt by the behavior. And if this is a pattern and practice on the part of the law enforcement agency, that would mean multiple different actions that would have to proceed separately,” Tsao said.

“Empowering the attorney general to be able to investigate, to request documents, to really get to the bottom of such practices, and then to enable them to seek remedial action is a very important step in making sure that these laws get complied with.”

Similar legislation offering protections for immigrants and phasing out immigrant detention centers were passed recently in California and Washington state.

“We are hoping that this bill will provide a model or template for other states to pick up, as they’re moving legislation forward and trying to provide protections for their local communities,” Tsao said.

The purpose of HB 2790 was to ensure there are no conflicts arising from jurisdictional issues, such as lawsuits against the county to prevent or prohibit public defenders from representing clients in federal immigration court, said Irakere Picon, a lead organizer of the Defenders for All Coalition and director of legal services at the Illinois Business Immigration Coalition.

“We’re very excited as advocates to ensure that we get to the point where somebody who is being detained and has to represent themselves in immigration court, someone who doesn’t speak English as a first language, doesn’t have to do that by themselves,” Picon said.

The bills have passed both chambers of the General Assembly and will be sent to Gov. J.B. Pritzker.