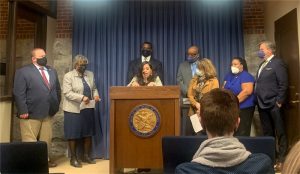 SPRINGFIELD – Illinois Senate Democrats outlined legislation during a Feb. 24 news conference that aims to address the ongoing teacher shortage throughout the state.

The bills would extend the number of days retired and substitute teachers would be able to teach in a school year, waive substitute teaching licensing fees, and lower the minimum age for a person who can become a paraprofessional.

While the package of legislation is a short-term fix, Senate Democrats said, it is intended to help provide immediate relief to the teaching shortage.

Courtney Goss, who works as a social and emotional support professional at Washington Middle School in Springfield, said it’s difficult to do her job because she often gets called to sub when teachers are absent and not enough substitutes are available.

As a support specialist, Goss said she works with students and teachers who have social and emotional concerns. But, she said, she is unable to provide that needed support when she fills in as a substitute. Something must be done, she said, because her students don’t receive the help they need when she cannot provide it.

“I can’t just tell people how to take care of themselves, how to prioritize things in their life, if I’m not doing the same,” Goss said.

Illinois State Board of Education data show there are 4,120 teaching and support vacancies across 852 school districts, including 1,703 full-time teaching vacancies, as of October.

Senate Bill 3907 allows short-term substitute teachers to teach for 15 consecutive days instead of five. Sen. Doris Turner, D-Springfield, said that it will provide schools an extra two weeks to find a long-term solution to their staffing issues.

During floor debate, Turner said the bill is in response to staffing shortages caused by the pandemic and it will be phased out in June 2023. The bill passed the Senate unanimously this week and will await a vote in the House.

Sen. Patrick Joyce, D-Essex, introduced Senate Bill 3893 that will extend the number of days substitute teachers can teach from 90 to 120 days for the next two years. That bill passed the Senate as well and is awaiting action in the House.

Sen. Napoleon Harris, D-Harvey, introduced SB 3201 that would allow retired teachers to return to the classroom for 140 paid days through the 2023 school year without affecting their retirement benefits. Currently, retired teachers are only allowed up to 120 days in the classroom. Only 100 of those days could come in a single classroom under the new bill.

Harris said the best way to tackle the shortage is by retaining veteran teachers and encouraging young leaders to join the profession. His bill awaits Senate action.

“This is a massive burden on our educational system and allowing retired teachers to return to school for a long period of time will help ease that burden,” Harris said.

According to ISBE, there are 1,242 vacancies for paraprofessionals statewide. Sen. Cristina Pacione-Zayas, D-Chicago, introduced Senate Bill 3988 that lowers the age from 19 to 18 for individuals seeking to receive a paraprofessional license. It passed the Senate unanimously and awaits House action.

Sen. Robert Martwick, D-Chicago, said Senate Bill 3465 is similar to a bill that was created for downstate teachers and allows Chicago Public Schools the option of hiring retired teachers without affecting their retirement annuity. It passed the Senate unanimously and awaits House action.

The Senate Democrats called their news conference a few hours after Senate Republicans unveiled a legislative package that they say promotes transparency and provides parents a voice in their child’s education.

In Senate Bill 4179, Republicans aim to require school districts to post school curriculum on the district website at least twice per year.

Sen. Neil Anderson, R-Andalusia, said he believes parents have a right to know what materials are being taught in schools in order to better understand what their child is learning.

“I have school-aged kids,” Anderson said. “I want to be able to adopt the same teaching method that instructor is using to help that student.”

Sen. Terri Bryant, R-Murphysboro, introduced Senate Bill 4180 that creates five new seats on the Illinois State Board of Education. One board member per judicial district would be elected by voters.

Bryant said parents have a say in electing local school board officials, but she feels they also deserve a say on the state board level, because of the power the body has over education standards.

Republicans also proposed strengthening and improving the state’s “Invest in Kids” program that provides scholarships to help low-income students. Scholarships are funded by private donations, the donors of which are eligible for tax credits.

The Republican bills had not moved in the Senate as of Feb. 25 afternoon, a legislative deadline for bills to move to final passage in the chamber.

Survey: More than half of collar county schools have teacher shortages