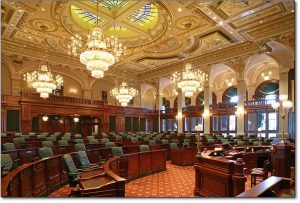 After the 2020 census, every state, including Illinois, will create new electoral maps, redrawing district lines for state legislators. States with more than one U.S. representative, likewise, revise their congressional district maps using a variety of legislative procedures. In a parallel process, Illinois counties redraw their district boundaries.

University of Illinois Extension’s Local Government Education program will cover the redistricting process and recent history in Illinois at a free online webinar at noon, Tuesday, April 20. Political science professors in the U of I system will provide an overview how the changes impact each level government in light of the anomalies in 2020 caused by the delayed release of census data.

The longstanding LGE program last delivered this program in 2011 on the heels of the prior completed decennial census. Local officials, community leaders, and citizens will gain an understanding in how changes in population at state and local levels may impact their communities, as well as learn how the local redrawing process will happen in their own counties.

Registration is required at the website: go.illinois.edu/LGE. If you will need an accommodation in order to participate, please email the contact Nancy Ouedraogo, Illinois Extension specialist, at esarey@illinois.edu. Early requests are strongly encouraged to allow sufficient time to meet your access needs. Participants can expect to get a local perspective on the redistricting process and ask questions directly to the following experts.

Christopher Z. Mooney is the W. Russell Arrington Professor of State Politics in the political science department at University of Illinois at Chicago. Mooney served as director of IGPA from 2013 through 2017 and from 2004 through 2013 and was an IGPA faculty member at University of Illinois at Springfield. Mooney studies comparative U.S. state politics, with special focus on state legislatures, and is a noted expert on term limits.

Since 2010, the American Political Science Association’s State Politics and Policy section has awarded the annual Christopher Z. Mooney Prize for the best dissertation the field. In 2012, Mooney was awarded that section’s Career Achievement Award. In 2017, he was elected to a two-year term as its president. The main focus of Mooney’s research involves the study of state politics and policy in the United States.

Brian J. Gaines is a professor at University of Illinois, with appointments in the department of political science and at the Institute of Government and Public Affairs. He received a bachelor degree with honors from the University of British Columbia and AM and Ph.D. degrees from Stanford University. Most of his research deals with elections, electoral rules, and public opinion. With Wendy Cho and Jake Bowers, he co-edited the Political Methodologist from 2010-2013. From 2011 to 2015, he was the editor of American Politics Research.

Michael P. McDonald is a professor of political science at University of Florida. In his career, he taught for two years at University of Illinois, Springfield. He is a co-principle director of the Public Mapping Project, an effort to encourage greater transparency and participation during redistricting. He worked as a redistricting consultant to governments and has been an expert witness to lawsuits in 15 states.