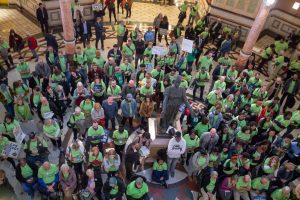 Advocates for the Clean Energy Jobs Act rally Wednesday, March 4 in the Illinois State Capitol Rotunda in Springfield during a lobby day for the bill’s passage. On Thursday, a Senate energy committee heard testimony from the bill’s backers and detractors as lawmakers look for a path forward on energy reforms. (Photo by Jerry Nowicki/Capitol News Illinois)

SPRINGFIELD — One day after hundreds rallied at the Capitol in support of a sweeping clean energy reform package, a Senate committee heard hours of testimony on the intricacies of the state’s energy landscape March 5.

State Sen. Michael Hastings, a Tinley Park Democrat who chairs the Senate Energy and Public Utilities Committee, said the hearing was the first of several planned before the General Assembly is scheduled to adjourn at the end of May. A House committee and a governor’s office working group have been discussing the matter at length as well.

The goal is to pass broad energy reforms to limit carbon emissions and accelerate the state’s pace toward achieving a renewable energy future. The committee process also included testimony from fossil fuel and nuclear energy generators, however, as they make up a vast majority of the state’s energy mix.

The Clean Energy Jobs Act, or CEJA, is the favored energy market reform of the approximately 700 demonstrators who were in Springfield on March 4 to lobby lawmakers for its passage.

“It’s time for a holistic approach which recognizes the interrelatedness of energy, emissions and equity,” Christie Hicks, of the Environmental Defense Fund, told the committee while speaking in favor of CEJA.

Supporters of CEJA said the bill aims to address a nationwide climate crisis by accelerating investment in clean energy sources and the electrification of the state’s transportation sector. It also creates Clean Jobs Workforce Hubs, which are “a network of frontline organizations that provide direct and sustained support for minority and disadvantaged communities.”

But Hastings said another focus for energy reforms would have to be the necessary threshold for passage in the General Assembly, and that means taking various interests into account.

“The goal is, how are we going to get 30 votes in the Senate and 60 votes in the House and how we can get the governor to sign it,” he said. “So you have to take in all the inputs, come to some sort of collaboration and figure out how to get across the finish line.”

He also addressed the inclusion of electric utility Commonwealth Edison and its parent company Exelon in negotiations. Those organizations have been the subject of investigative activity under a sweeping federal probe of Statehouse corruption.

Hastings said the public hearings were aimed at ensuring the process is transparent, that all stakeholders have their say and that the end product is effective legislation.

“My job as the chairman of the Energy and Public Utilities Committee, when we’re trying to get policy on investing in renewable energy, isn’t to be the judge or the persecutor,” Hastings said. “My job is to focus on policy and determine how Illinois can effectively implement that. So that’s my focus. And that’s why I said we’ll have a series of hearings and listen to all the stakeholders to make sure that there’s good policy.”

One difficulty in statewide energy reforms is a geographic split when it comes to the state’s energy grids — most of the state north of approximately Interstate 80 is on the PJM grid, while everything south of that point and a portion of northwest Illinois is on the MISO grid.

Those multi-state, federally regulated organizations operate wholesale energy markets. They also procure what is called “capacity,” or a generator’s guarantee that they can provide enough energy on the state’s peak usage days, plus a certain percentage on top of that, for three years in advance.

The goal of these organizations and their capacity markets is to keep prices low for the consumer while guaranteeing the lights stay on.

CEJA backers, however, say a recent decision by the Federal Energy Regulatory Commission has created a need for reforms to capacity markets in the PJM region.

They say a change to PJM’s minimum offer price rule, or MOPR, which was billed by FERC as an effort to protect the market from “price suppression effects” of state subsidies, is actually a Trump administration bailout of fossil fuels.

The new MOPR would essentially require generators to bid for capacity contracts at a certain minimum level without factoring in state subsidies, which would otherwise allow renewables to bid in lower than other energy sources.

CEJA backers say the rule change is beneficial to the fossil fuel industry by making it less likely for renewables to win capacity bids.

The FERC ruling also allows states to take capacity procurements into their own hands, however, and one of the core tenets of CEJA would do just that by giving the authority to the Illinois Power Agency.

There was much discussion as to how Illinois’ energy landscape would be affected if the state were to pull out of the multi-state PJM capacity procurement auction and go its own route, but Hastings said the “devil is in the details” if such a proposal is to come to fruition.

Another bill is Path to 100, which solar and wind advocates say could be passed independently of capacity market or broader energy reforms. That measure calls for a raised rate cap on consumer bills, to about 4 percent from 2 percent, to fund renewable energy projects.

Anthony Star, director of the Illinois Power Agency which manages implementation of the state’s Renewable Portfolio Standard, said the $230 million raised annually through the 2 percent charge has allowed for vast investment in renewable energy, but there’s not enough funding to bring the state’s energy mix to 25 percent renewables by 2025, which is a goal of current law. That number currently sits at about 7 percent in Illinois.

On top of that, Star said front-loaded contracts for small-scale projects, among other factors, make it so “annual payment obligations will soon exceed collections” for renewable projects, meaning new developments would be frozen out unless more funding is realized.

But there’s several other interests at play outside of the two most highly publicized bills as well, with some suggesting a price on carbon emissions would be more efficient than subsidizing renewables.

NRG Energy and Vistra Energy, two operators of coal-fired power plants in the state, are backing their own measures that would each affect the MISO and PJM grids differently.

Downstate energy delivery company Ameren Illinois brought a new plan to the table Thursday as well, with a focus on renewable energy development, transportation electrification and battery storage in the MISO region.