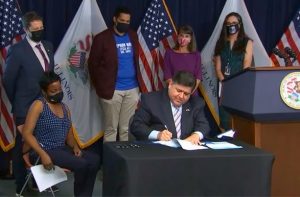 SPRINGFIELD – Gov. J.B. Pritzker has been steadily acting on more than 660 bills sent to him by the General Assembly this year ahead of a weekend deadline for bill action.

On Wednesday, he signed House Bill 2595, which beginning in 2023 requires insurers to provide coverage to all medically necessary mental health care in Illinois, including for mental, emotional, nervous or substance use disorders.

He also signed House Bill 2784 to create a mental health first responder system in coordination with an emergency mental and behavioral health phone system that was created by federal law.

The Division of Mental Health of the state’s Department of Human Services is preparing to coordinate mental and behavioral health services to all Illinoisans as part of the federally mandated adoption of the 988 phone number. The number is expected to go online by July 2022.

The new law will require 911 call center operators to coordinate with the mobile mental and behavioral health services that are being established through the Division of Mental Health, which is also establishing regional advisory committees in each Emergency Medical Services region.

Pritzker has signed more than 570 bills thus far and vetoed a handful.

The governor has 60 days from when he received the bills from the General Assembly to either sign or veto them, after which time period the bill becomes law even without his signature.

For the bills that are vetoed, lawmakers will return in the fall to consider overrides or acceptance of the governor’s changes.

Most of the remaining 82 bills were sent to him at the end of June, so the 60-day clock coincides with the end of this week for all but a few of them. Below are a few of the bills he has acted on in recent days.

Sex education: Pritzker on Aug. 20 signed Senate Bill 818, which creates a new “personal health and safety” curriculum for grades K-5, and a “sexual health education” curriculum for grades 6-12. The bill received resistance from Republican lawmakers and religious groups for its “culturally appropriate” guidelines, including education on gender identities, different types of families, sexual orientation, consent and a woman’s options during pregnancy.

Parents can opt their students out of the coursework without penalty, and each individual school district may determine whether it will teach sex education. If a district offers the subject, the curriculum must use all or part of the curriculum established by the bill.

The actual statewide curriculum would be developed by the Illinois State Board of Education by Aug. 1, 2022.

But many of the guidelines contained in the statute require that sex ed curricula be aligned with National Sex Education Standards, an initiative by non-government organizations to provide “guidance on essential minimum core content and skills needed for sex education that is age-appropriate.” 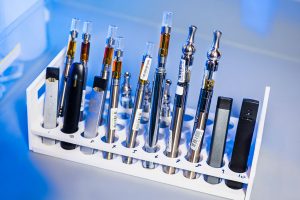 Sexting education: The governor also signed House Bill 24, requiring classes that teach sex education to include an age-appropriate discussion regarding sexting. That discussion would include information on possible consequences of sharing, possessing or forwarding sexually explicit content, as well as the importance of internet safety. It took effect immediately.

Construction transparency: Pritzker signed House Bill 253, which requires the Illinois Department of Transportation to establish and implement a transportation performance program for state projects. IDOT is also required to develop a statewide highway system asset management plan aimed at preserving and improving roadways while reducing costs. The department is instructed to develop a performance-based process for selecting which projects will be prioritized. The bill passed both the House and Senate with unanimous, bipartisan support. It applies after January 2022.

Underage e-cig sales: Pritzker signed Senate Bills 512 and 555, prohibiting e-cigarette and vaping marketing that targets children and ensuring vape shop compliance with the state’s minimum purchasing age of 21. The law allows underage individuals to test a retailer’s compliance as part of a compliance check in conjunction with law enforcement. They will go into effect January 2022.

Thus far, the governor has issued three vetoes and two amendatory vetoes, including one of the budget bill that needed the amendatory action because of omitted effective dates.

Maternal health: One Pritzker amendatory veto aims to fix a technical issue on a bill he noted he supports. The measure, Senate Bill 967, will expand the current Illinois Medicaid plan “so that individuals who don’t qualify for full benefit Medicaid still have coverage for preventive contraceptive care and associated screenings related to reproductive well-being,” according to the governor’s office.

The bill passed unanimously, so it shouldn’t be difficult for sponsors to find the votes to accept the amendatory veto, which changes only an effective date.

State Sen. Cristina Castro, D-Elgin, the bill’s Senate sponsor, noted in a news release when the bill passed that it also “would provide support for pregnant and new mothers for pregnancy-related condition, including mental health and substance use disorders by requiring private insurance plans to cover postpartum complications up to one year after delivery among other requirements.”

Pollution control: While lawmakers passed House Bill 3190 to limit disposal by “incineration” of certain substances, Pritzker said in a veto message the definition of “incineration” is too broad, creating unforeseen increases to greenhouse gas emissions. He urged lawmakers to pass another bill with the same intent but clearer language.

Wetland protection: Pritzker vetoed Senate Bill 1770, which exempts construction within a 6-mile radius of the Ohio and Mississippi Rivers confluence from the provisions of the Interagency Wetland Policy Act of 1989. He said while he’s a strong supporter of a port district project in the area, the bill “would unnecessarily turn the determination of appropriate wetland mitigation over to the Federal Government by severely restricting the State of Illinois’ involvement in the process.”

Duplicative bill: He also vetoed House Bill 1966, noting in his veto message that he already signed Senate Bill 1646, a “similar bill with more expansive provisions” which extends an application deadline pertaining to members of the Teachers’ Retirement System at a private school recognized by the Illinois State Board of Education.